Decriminalisation of all drugs for personal use considered 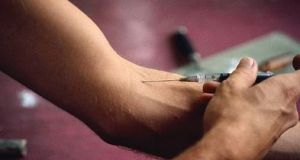 The decriminalisation of all drugs, including heroin, cocaine and cannabis, for personal use is one of the policy options outlined in the forthcoming National Drug Strategy.

Minister of State for Drugs Catherine Byrne will publish the strategy – which will govern all drugs policy from now until 2020 – before the summer.

It proposes a group be established to “consider the approaches taken in other jurisdictions to the possession of small quantities of drugs for personal use”.

There have been growing calls in recent years, including from Ms Byrne’s predecessor Aodhán Ó Ríordáin, for the decriminalisation of drugs for personal use.

Those in favour argue criminalising possession of small quantities of drugs is counter-productive for the individual and expensive for society, and that it would be more productive to provide quick referrals to treatment services.

The latest draft of the strategy, seen by The Irish Times, says the group should examine the “rationale” and “effectiveness” of the current criminal-justice approach and compare it with other jurisdictions.

The advantages and disadvantages of other approaches for “the individual, family and society” should be considered, along with the legislative changes necessary to introduce alternatives to the regime where people found in possession of small quantities of drugs face arrest, prosecution and possible imprisonment.

A “cost benefit analysis of alternative approaches to criminal sanctions for simple possession offences” should be conducted, and the group should “make recommendations to the relevant Minister within 12 months”.

One of the first countries to decriminalise drugs for personal use was Portugal in 2000. It saw a dramatic fall in the number of overdoses, new HIV cases and an increase in numbers seeking treatment.

The document notes increased use of cannabis and ecstasy, particularly among young people, and a “rise in cannabis-related problems...associated with...more potent strains”.

It says the number of young people who describe themselves as current users of cannabis “has almost doubled since 2002/3”.

Ageing heroin users are an emerging cohort with particular health needs, including “dental deterioration and special health needs caused by long-term drug use”. Their needs should be assessed and targeted services developed.

Covid-19 toll on mental health to be felt ‘for many years’ 00:01
Three firearms and drugs worth €115,000 seized in west Dublin 23:24
Woman arrested after live-streaming car chase with gardaí 22:47
Eamonn McCann to step down as Derry councillor on health grounds 22:20
Belgian vessel detained off Cork coast over alleged fishing breaches 21:56