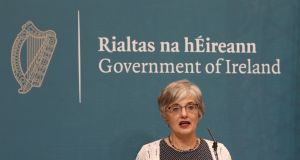 Minister for Children Katherine Zappone has said that the Government could have refused a request from the commission investigating mother-and-baby homes to extend its deadline for a second time to deliver its final report.

However, they did not do so as it was felt that a comprehensive analysis was required and if additional time was necessary to do so then the commission should be given that extra time.

The commission, chaired by retired Circuit Court Judge Yvonne Murphy, was set up in February 2015 after a Galway-based historian, Catherine Corless, published research that revealed death certificates for 796 children at the Tuam mother-and-baby home with no indication of their burial places.

The commission has been tasked with investigating 14 mother-and-baby homes, as well as four so-called “County Homes”, which operated across the State at different times between 1922 and 1998.

Ms Zappone told RTÉ’s News at One that she appreciated the distress such a delay will cause to the survivors of the homes but, having met with Ms Justice Murphy, it was felt this was the most appropriate way.

Ms Zappone also revealed that the commission is to report in March on burial arrangements at what it calls “major institutions”.

This is the second extension granted to the mother-and-baby homes commission; its final report had originally been due in February 2018, and was delayed initially until December 2018.

The Cabinet has now given the commission until February 2020 to complete its report.

It is believed the most recent request was a result of the workload which involved investigating the activities of such institutions between 1922 and 1998.

An interim report was published in 2017, which said: “significant quantities of human remains have been discovered in at least 17 of the 20 underground chambers which were examined” at the Tuam site.

The remains “involved a number of individuals with age-at-death ranges from approximately 35 foetal weeks to two to three years”.

The commission said it was “shocked by this discovery” and was continuing its investigation “into who was responsible for the disposal of human remains in this way”.

Because of the new information presented recently, the commission plans to conduct geophysical surveys on the burial grounds associated with the former Sean Ross Abbey institution in Co Tipperary as part of its examination of burial arrangements at this location.

When asked about the inclusion of residents of the Protestant Bethany Home in Dublin, Ms Zappone said that the Government had decided to wait until it received final reports before making any decision.

Last year the commission said it could not see why Bethany residents were excluded from the State’s 2002 redress scheme.

Bethany survivors have alleged they are being discriminated against on religious grounds, a charge which successive governments have rejected.

Ms Zappone said there are multiple layers of inquiry being conducted over a number of institutions.

The findings of the commission will be sent to Government before individual redress schemes are decided, she added.

The commission is independent from Government, said the Minister.

Under its broad terms of reference, the commission is looking at living conditions, care arrangements, infant mortality, burial arrangements, vaccine trials, illegal adoption, social attitudes and women’s pathways in and out of these institutions.

These babies were usually adopted, frequently by Catholic families in the United States, in return for donations.

It is estimated that at least 35,000 unmarried mothers spent time in the 14 municipally funded mother-and-baby homes run by religious orders in Ireland from the foundation of the State until the late 1990s.

It is known that at least 796 infants died at Tuam, but other homes, such as Castlepollard in Co Westmeath, are thought to hold the remains of up to 3,200 babies.