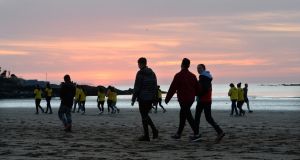 More than 200,000 people across Ireland and the world gathered on Saturday morning to take part in the Darkness into Light event which raises awareness around suicide, self-harm and mental health.

Celebrating its 10th year, the event attracted thousands of walkers and runners to 180 venues nationally and internationally with participants setting out shortly after 4am to catch the first rays of light along a 5km route.

The first event of the morning kicked off in Wellington and Christchurch in New Zealand before moving to Australia, then across the Middle East and onto Belgium, Germany, Spain, the UK, Ireland and finally to the US and Canada.

Darkness Into Light is Pieta House’s biggest fundraising appeal and raises more than €4 million which it uses to fund its services. Each participant pays €25 to do the walk.

Kate Sadlier returned home to Cahersiveen in Co Kerry to take part in her fifth Darkness into Light Event with her two sisters.

“Everybody does it for their own reasons but for me in particular, I think there’s that sense of solidarity and support from everyone. I find a serious sense of healing in it and a connectedness to those who have gone.”

Ms Sadlier was joined by her eldest and youngest sister along the Saturday morning route which set off from Coláiste na Sceilge in Cahersiveen and attracted more than 500 participants.

“This morning was beautiful and down here in southwest Kerry along the Wild Atlantic Way it’s amazing. There’s a great air of positivity, camaraderie and strength in it. I found it so powerful looking out over Valentia island; I noticed the stillness and peace of the water. If only those people who have left this world could stand there and take it all in. When you see that daybreak and sunrise you look up and say, they’re at peace too.”

Sallie Ennis from Dublin took part in the event at Marlay Park with first and second year students from the school where she teaches. Her first Darkness into Light event was in 2014 when a friend in her running group suggested they get involved.

“There’s all walks of life there; really young kids, kids in buggies, grandparents. It’s a lovely community atmosphere and you know everyone’s there for a really good cause.”

Marlay Park participants in Saturday’s event were accompanied by music from the Rathfarnham Ukelele Band who played as walkers and runners set off from the carpark.

“Even walking down to the park this morning and seeing thousands of people out in the middle of the night with their big yellow t-shirts you get goose bumps and the hairs come up on the back of your neck. The symbolism of darkness into light is really poignant.”

The very first Darkness into Light event was held in Phoenix Park in 2009 where 400 people attended. A decade on, more than 15,000 people were joined by Taoiseach Leo Varadkar and Brian Higgins, chief executive of Pieta House along the 5 kilometre route through the city park on Saturday morning.