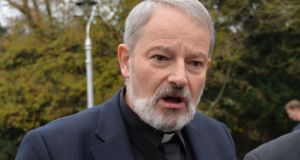 Bishop of Elphin Kevin Doran: under Act, health workers ‘required to participate in what they believe to be fundamentally immoral’. Photograph: Alan Betson

The Oireachtas Committee on the Eighth Amendment “would appear to have long since made up its mind” on repealing the constitutional ban on abortion, Bishop of Elphin Kevin Doran has said.

The chairman of the Catholic bishops’ consultative group on bioethics empathised with people who did not wish to co-operate with its proceedings.

“I can understand someone who has their personal integrity feeling that ‘Well, if the decision is already made there’s no point in me going in there wasting my time, making a contribution to people who really don’t want to hear what I have to say anyway’.”

Bishop Doran was speaking to The Irish Times at a conference, Abortion, Disability, and the Law, in Athlone on Friday. It was jointly hosted by the Oxford-based Anscombe Bioethics Centre, a Catholic academic institute, and the Consultative Group on Bioethics of the Irish Catholic Bishops’ Conference.

Earlier Bishop Doran told the conference that the manner in which conscientious objection was being interpreted “in the so-called Protection of Life in Pregnancy Act gives rise to real concern”.

Doctors and nurses “are allowed under the Act to opt out of providing or participating in abortion, provided they refer the patient to someone else who will perform the procedure”, he said. “In other words, they are still required to participate in what they believe to be fundamentally immoral. Healthcare administrators have no recourse to conscientious objection.”

He said that “in many jurisdictions where abortion is already legally permitted, healthcare professionals who refuse to take a human life for reasons of conscience are regarded as troublesome and unreliable employees and not good candidates for promotion”.

The difficulty was that “in our liberal democracy, people who provide services are regarded as ‘delivery people’ with no personal investment in what they deliver”, he said. “The customer is always right.”

He also said that increasingly “prenatal diagnosis is thought of and used as a means of screening out babies who, in the eyes of adults, should not be brought to birth”.

She objected to terms such as “fatal foetal abnormality”, “incompatible with life”, “baby with no head”, “anencephalic”, “baby suffers in the womb” and “no human life to protect”, which, she said, were used in different ways to avoid acknowledging the babies in question had a disability and associated rights.

The term fatal foetal abnormality, she said, was “not medically accurate” and “does not reflect the reality”.