As it made its first crucial decision this week, fresh allegations of bias and a lack of impartiality were made against the committee 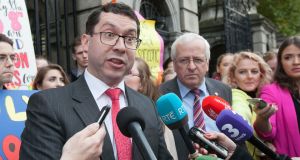 Independent senator Rónán Mullen and Independent TD Mattie McGrath allege the work of the Oireachtas committee on the eighth amendment has been fixed to deliver a particular outcome. Photograph: Gareth Chaney/Collins

Given the divisive subject that is currently before it, the work of the Oireachtas committee examining the eighth amendment to the Constitution was always going to be closely scrutinised.

However, as it made its first crucial decision this week, fresh allegations of bias and a lack of impartiality were made against the committee.

Many of the committee’s members believe that such claims are part of a deliberate campaign to undermine its work, while others are insistent the committee has a pre-determined outcome.

The committee’s terms of reference are very specific. It is tasked with examining the report by the Citizens’ Assembly and making recommendations on the eighth amendment to the Dáil and Seanad.

It has three months to complete this process and a final report is to be produced to both Houses of the Oireachtas by December 20th. A vote will be held in the Dáil and Seanad before a referendum will be put to the people.

Mr Mullen says the deliberations are a “farce” and “cynical”, while Mr McGrath says he has been “intimidated” and “threatened” by his colleagues on the committee.

This is vehemently opposed by Independent senator Lynne Ruane, who is also a member of the Oireachtas committee.

Ms Ruane said: “If all the evidence is stacked against you, the easiest thing to claim is bias. It does not mean it is true. This is part of an orchestrated campaign to undermine the work of the committee.”

Rightly or wrongly, Mr McGrath and Mr Mullen’s argument is gaining some traction outside Leinster House.

Prof Patricia Casey withdrew from a scheduled appearance before the committee this week claiming its work is bound to conclude that a referendum is required to repeal the eighth amendment. Similar statements were also made at the Fianna Fáil ardfheis last weekend.

The committee has 21 members including the chair, Fine Gael senator Catherine Noone. Originally the Dáil business committee had decided it would have 16 members but this was expanded after a request from the Seanad.

Currently there are six Fine Gael members, five Fianna Fáil, three Sinn Féin, one Labour Party TD and the remainder of the committee is made up of Independents. There are varying views within the committee on the future of the eighth amendment.

This is more evident within the two mainstream parties, Fine Gael and Fianna Fáil, and the representation on the committee showcases the divergence of opinion that exists.

Sinn Féin and Labour are in favour of repealing Article 40.3.3 from the Constitution but believe legislation should be put in place to allow for abortion in certain circumstances. There are varying positions among the Independent members of the committee.

Mr Mullen, Mr McGrath and Fine Gael TD Peter Fitzpatrick are the three members of the committee advocating for the eighth amendment to be retained as it currently stands.

Fine Gael TD Kate O’Connell, who is a member of the committee, insists the committee’s make-up is reflective of Irish society which, she believes, accepts the status quo is no longer tenable.

The anti-abortion groups have also insisted the witness list is skewed to persons advocating for abortion. In July, the committee met in private session and agreed how to proceed with its work.

Members were asked to consider what witnesses they would like to hear from and were asked to provide the names by September. There was one stipulation: members must submit a detailed justification as to the necessity of the witnesses’ attendance and provide evidence of their expertise in this area including published work.

If the person was travelling from abroad, additional information was required to justify the expense to the committee.

It was agreed by the members that advocacy groups would be precluded from the deliberations and evidence was only to be heard from experts.

Mr Mullen submitted three names: Caroline Simons, legal advisor to the Pro-Life Campaign; Martin and Sinéad McBreen, who have a daughter with Down syndrome; and Dr Marty McCaffrey, professor of paediatrics in neonatal-perinatal medicine at University of North Carolina.

It was agreed Mr Binchy would attend but Ms Simons would not as members believed she was not a constitutional expert. Dr McCaffrey is due to attend over the coming weeks.

Despite an initial decision to preclude advocacy groups, Mr Mullen and McGrath were asked to choose between One Day More and Mr and Ms McBreen to give testimony.

They agreed on One Day More and, in return, Terminations for Medical Reasons Ireland – which represents couples who have endured fatal foetal abnormalities – would appear before the committee.

According to members of the committee Mr McGrath and Mr Mullen did not provide as explanation to why Prof V Chireau should attend, and have not done so despite several requests by the committee’s chair.

Both Mr Mullen and Mr McGrath said it was not their role to select the witnesses, or to ensure balance. This, they insist, is a job for Ms Noone and the committee staff.

Mr Mullen told The Irish Times: “Certainly the majority of the people were not accepted. Many suggestions I made were disregarded. This is clearly a very discredited process.”

Ms Noone said the door remained open for Mr Mullen and Mr McGrath to submit the names of any witness they would like to hear from.

She said the practice agreed by the members was applicable to every individual. She cited the example of Solidarity TD Ruth Coppinger, who requested to hear from Dr Abigail Aiken, a Texan academic. The committee agreed to hear from Ms Aiken when published work of hers was produced.

Mr Browne, who said he had not got a fully-formed view on the issue of the eighth amendment, said the committee’s task was to review to Citizen’s Assembly recommendations and provide a pathway forward.

He said: “People are losing the run of themselves about the power this committee has. We are a committee to come up with suggestions.

“This was not meant to be a committee to have a wide-ranging discussion on abortion, this was to review the Citizen’s Assembly report and then report back to the Dáil on it.

“The philosophical debate will take place down the line, that is not within the committee’s terms of reference. We are a review group and I think that should be kept in mind at all times.”