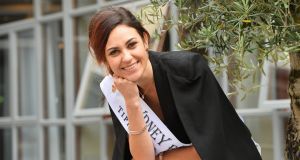 Journalist Brianna Parkins, the former Sydney Rose, has said that she would like to return to Ireland to help campaign to repeal the Eighth Amendment in the run-up to next year’s referendum.

Ms Parkins spoke on stage at last year’s Rose of Tralee of her “dream” of seeing the amendment repealed and abortion legalised. On Thursday night she said in Sydney that she was “tempted to go over” and campaign on the issue.

The Government is due to hold a referendum on the issue in the summer of next year.

“I am very tempted, depending on the time,” she told reporters, speaking after President Michael D Higgins addressed members of the Sydney’s Irish community in the Paddington neighbourhood of the city.

“I would love to go back and do advocacy work. It depends on if my employers gives me leave. It is quite a jaunt. It would be great. I am friendly with the [Repeal the Eighth] organisations and it would be great to help them out. And I would have to get permission because I work for a public broadcaster.”

Ms Parkins declined to comment on the decision of this year’s Rose of Tralee, junior doctor Jennifer Byrne, not to discuss issues such as the Eighth Amendment after she won the competition in August. Ms Byrne specialises in general practice with a focus on women’s health, in particular obstetrics and gynaecology.

“Because I believe in choice, I also believe in women’s right to choose when to speak out on these issues, and this is an issue she doesn’t feel comfortable speaking about and I don’t think it’s my place to instruct women on how to feel about these issues,” said Ms Parkins.

The Australian described her position on the issue as a “double bind”.

“If you believe in choice, you got to respect a woman’s right from refraining on commenting on an issue,” she said.

Ms Parkins thought that Ms Byrne, as a doctor, may have found it more difficult to speak on the subject.

“I know doctors in Australia are quite bound by what they can say,” she said, referring to the fact that abortion is illegal in New South Wales, where Sydney is located, and still in the criminal code.

“So they are bound professionally when they give advice. So I understand why she might tread more carefully given that,” she said.

Although abortion is a criminal offence in New South Wales, it is legal if a doctor finds any economic, social or medical reason or if there is a serious danger to the pregnant woman’s life or to her physical or mental health.

Asked about life after being Sydney Rose, Ms Parkins said that now she was “not ‘rosing’ or causing minor international scandals”, she was back working as a journalist. She was writing about Aboriginal Australians and how intermarriage was not allowed in the country during the 1950s and 1960s.

She said she was moved by Mr Higgins making a reference in his speech to the 5,000-year-old Irish language and the 65,000-year-old heritage of the Aboriginal people.

In all his public remarks in Australia, Mr Higgins has started by recognising the Aboriginal people as the original inhabitants and guardians of the land.

“My brother is an Aboriginal elder so it was really touching and really nice for me to hear that the two cultures can stand side by side,” she said.