Gap has increased by 2%, showing women’s educational strides are not translating to pay 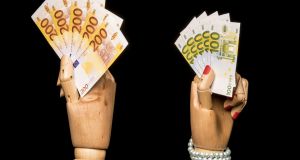 Despite improvements in other areas of gender equality in Ireland, the pay gap has been growing. Photograph: iStock

On average, women are paid 14 per cent less than men, the latest data from the Central Statistics Office shows, indicating that pay differences are widening.

The figures from 2014 are based on gross hourly earnings, and compare with a 12 per cent difference between men and women’s pay in 2012.

So despite improvements in other areas of gender equality in Ireland, this gap has been growing.

At the same time, the CSO figures show that more than 55 per cent of all women aged 25-34 years had a third-level qualification in 2016, compared with 43 per cent of men in the same age group.

So women have made strides in education, but that is not translating into earning power.

With educational differences such as that, it is no surprise that a third of women at work in Ireland in 2016 were employed in the health and education sectors, while the highest proportions of men were in construction, agriculture and transport.

The divergence seems to begin much earlier in the education system. By the time the class of 2016 sat down to their Leaving Cert, more girls were taking higher-level English, French, Irish, biology, chemistry, art, home economics and music, and more boys were taking higher level mathematics, physics, design and communication graphics, construction studies and engineering.

Working in the home

The difference between men and women working in the home is also stark.

The housework divide was echoed in a recent report from the European Institute for Gender Equality, which found that women in Ireland are still doing 40 per cent more housework than men, whether working or not.

It also points to the need for early intervention in the education system to attract more girls into male-dominated subjects and vice versa.

As the OECD has said, gender equality is not just about economic empowerment, it is about fairness and equity. It is also a key factor in self-reported wellbeing and happiness across the world.