Conference to discuss issues of social exclusion, discrimination and unemployment 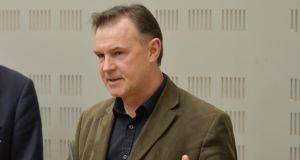 Traveller activist Thomas McCann: “Unless we address the wider societal and institutional issues, it is going to get worse for Travellers.” Photograph: Alan Betson

In Castlerea prison, in Co Roscommon, over 50 per cent of prisoners are Travellers, according to figures presented at a conference in Dublin on Friday.

Hosted by the Travellers in Prison initiative, it heard from Traveller activists, the Irish Prison Service (IPS) and the Probation Service.

Minister of State for Equality David Staunton said the figures from the IPS tallied with international data on minorities in prison. In New Zealand, for example, where Maori people accounted for about 14 per cent of the population, they represented 50.8 per cent of prisoners, he said.

The IPS has begun gathering ethnicity data on prisoners at committal, and robust data will be available in a year.

Vivian Geiran, director of the Probation Service, said the issue of Travellers in the criminal justice system had been “under the radar” up to now.

“The critical factor in knowing about the over-representation of Travellers in the system is gathering robust data. We have started to do that since last year. We are finding that almost 10 per cent of the people under probation supervision are Travellers, so it’s hugely significant . . . The reasons why, it’s something that needs a lot more research.

“We also need to improve how we engage with Travellers, the kind of programmes we provide . . . they do need to be culturally sensitive.”

Thomas McCann,Traveller activist and founder of the Traveller Counselling Service, said though no one should make excuses for any Traveller that breaks the law, it was important “to analyse and understand the wider conditions of Travellers’ lives to understand their over-representation in the prisons”.

“As a community Travellers suffer extreme discrimination, racism and social exclusion,” he said, pointing to their over 80 per cent unemployment rate, average school finishing age of 15 years and the suicide rate of six times that of the settled community.

Anti-Traveller sentiment in Irish society, he said, could be traced back to the 1963 government report, from the Commission on Itinerancy, which described Travellers as “problems” for which there would be “no final solution . . . until they are absorbed into the general community”.

“It saw us as failed settled people,” said Mr McCann, and multiple problems flowed from it, including “internalised shame” among Travellers and hostility towards Travellers from the settled community. Though he hoped recognition of Traveller ethnicity earlier this year could begin to undo “five decades of damage”, he feared “unless we address the wider societal and institutional issues it is going to get worse for Travellers”.

Mr Staunton said he wanted feuding and conflict within the Traveller community addressed.