Covid-19 payment refused to 1,200 people with no address in State

Department of Social Protection has withheld the €350 payment to 46,000 people 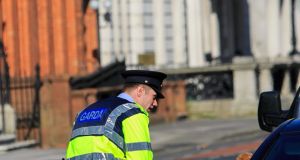 The Department of Social Protection has said its officials were taking part in roadside checks with gardaí as part of its measures to combat fraud. Photograph: Collins

Approximately 1,200 people were refused the Covid-19 unemployment payment last week because it was found they did not have an address in the State, the Department of Employment Affairs and Social Protection has said.

When processing claims for last week’s €350 payment, the department withheld 46,000 payments “for a variety of reasons,” it said.

The total amount withheld was in excess of €16 million.

The so-called Pup scheme, which was introduced to ensure that those people who lost their jobs as a result of the pandemic had an income, currently has 589,000 recipients.

Residency in the State is one of the criteria for qualification.

The department checks applications for the payment to ensure the applicants qualify on the basis of the information submitted. It also conducts checks on approved applications, such as by comparing the application with data held by the Revenue Commissioners.

In the most recent payment run, more than 46,000 payments were withheld for a variety of reasons, including 16,500 claims where it was found, from data held by the Revenue, that the people concerned were in receipt of the Covid-19 wage subsidy scheme, also introduced as part of the State’s lockdown measures.

In relation to claims withheld because the applicants were identified as not having an address in the jurisdiction, the department said its inspection staff worked with the customs service and the gardaí at ports and airports, to identify people leaving the State who may be receiving the payment.

“Our inspectors are also taking part in roadside checks with An Garda Síochána as part of our control response,” the department said.

As with other welfare schemes, the department contacts recipients where ‘ex ante’ checks indicate that they may not have an entitlement, and asks them to furnish evidence to substantiate their claim.

“Over the past 4-5 weeks, circa 7,000 letters have issued to recipients requesting them to confirm that they meet the eligibility conditions for the Pup. This process is ongoing.”

The department said it is possible for an employer to provide information about employees who avail of the payment rather than continue working.

“Where an employer considers that their employee has left work in order to claim the Pup, or refuses an offer of employment, it is open to them to report this to the department by emailing C19EmployerReports@welfare.ie.”

Sometimes claims are initially refused but later granted, where the initial application, for instance, includes incorrect or incomplete information, the department said.

A number of methods have been put in place for the refunding of money paid out in error through the scheme.