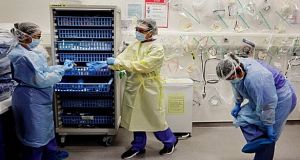 World Health Organisation: ‘You must be the first mover. The virus will always get you if you don’t move quickly.’ File photograph: The Irish Times

My mother used to warn me that it was much easier to get into difficulty than it was to get out of it. There is no doubt that this is never truer than when dealing with a major crisis such as the coronavirus pandemic.

Across the world countries have adopted what is undoubtedly the critical intervention to prevent person-to-person spread of this infectious disease, and that is to reduce drastically the possibility of person-to-person contact by means of enforced social restriction. In some countries these decisions have been made with incredible speed, and if we’ve learned one lesson from this whole episode it is that speed is of the essence. Delay costs lives. As Dr Mike Ryan of the World Health Organisation (WHO) put it: “Be fast. Have no regrets. You must be the first mover. The virus will always get you if you don’t move quickly.”

Putting in place life-changing restrictions that cover every single aspect of society is one thing. Making the right decisions about undoing them is an entirely different matter. Not only is it much more complex and protracted, but there are all manner of voices which will urge caution on the one hand, and speed on the other. As the Republic of Ireland takes the first step in its five-step road map to resume normal life in the country it appears to do so from a position of strength. Last week the director general of WHO, Dr Tedros Adhanom Ghebreyesus, posed three questions that should be answered positively before loosening of restrictions takes place.

First: “Is the outbreak under control?” The South appears to have done well in establishing control and the steady decline in the daily numbers of new cases is good grounds for optimism and supports the taking of the first steps back from the full gamut of restrictions.

Second: “Is the healthcare system able to cope with a resurgence of cases that may arise after relaxing certain measures?” This is rather difficult to answer. As far as hospital care is concerned, it has worked effectively so far and looks unlikely to be overwhelmed at any time in the future of this pandemic. However, I remain very concerned about the situation in institutional settings. One of the lasting disgraces of this episode will be the way in which, in several countries, the frail elderly have been neglected and allowed to fall victim. There is more to be done to prevent further institutional outbreaks.

Third: “Is the public health surveillance system able to detect and manage the cases and their contacts and identify a resurgence of cases?” This is key in my view. Not to meet this test risks squandering of all of the sacrifices that have been made thus far. Happily, the South has a good system in place that appears to be working well, despite the pressure put upon it by disastrous outbreaks in care homes and the episodes associated with meat-processing plants. Shortening the time interval between testing and the results being available would of course further improve the position.

Overall, the judgment must be that this is the right time for the South to start taking some slow steps forward out of the restrictions. The road map quite rightly makes it explicit that at any point in time restrictions may have to be reintroduced and that success depends on maintaining a continued high level of community self-discipline.

The one major shadow that lies over progress must be the decidedly unimpressive situation in the North. Extremely poor data has handicapped understanding of the position there as indeed has the failure, so far, to establish an effective system for case finding, testing, contact tracing and isolation. The approach of the Department of Health has been secretive and unresponsive, even in the face of substantial criticism. The relative unavailability of either the Minister of Health or the chief medical officer for interview in the media stands in stark contrast to the position in Dublin.

There are three outstanding issues that require an urgent all-Ireland response. One is the investigation of the relatively high incidence of cases of coronavirus in the Border counties of the Republic and the second is the difficult issue of port and airport restrictions. The third is the nonsensical difference between the recommendation, under some circumstances, of 14-day isolation in the South and seven in the North.

There is a real beacon of hope, however. And that is the adoption last week by the Assembly Executive of a plan for coronavirus entitled, Executive Approach to Decision-Making. It not only mentioned the importance of WHO policy but also gave a commitment to “put in place robust arrangements to test, track and trace those infected by, or at risk of infection from, coronavirus”. This was accompanied by a refusal to go along with the dangerous and foolhardy decision by the Westminster government to start easing some of the lockdown restrictions. It is clear that First Minister Arlene Foster and Deputy First Minister Michele O’Neill are now on the same page.

The crucial question is have they got the authority and willpower to force the Department of Health in Northern Ireland take the necessary actions to build a safe path forward? The health of the whole island may depend on the answer to that question.

1 Why you still can’t have a European holiday this summer. Or can you?
2 Former Kilkenny hurler dies after bike struck by tractor
3 Theatre-training legend Betty Ann Norton dies in Dublin
4 America is not broken, it was built this way
5 One of most powerful images of War of Independence
Real news has value SUBSCRIBE