Over 80% would install Covid-19 tracing app to ease restrictions 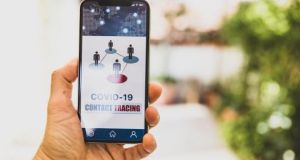 More than eight out of 10 people would consider installing a contact-tracing app if it contributed to an easing of restrictions imposed to slow the spread of coronavirus, according to a new survey.

The findings are from the third phase of the Corona Citizens’ Science study, a population-wide survey conducted by research teams at NUI Galway, Dublin City University and the Insight SFI Centre for Data Analytics (NUI Galway).

The study is examining the impact of the coronavirus pandemic and the associated restrictive measures, such as lockdown and social distancing, on public life.

More than 8,700 people took part in the survey, which was conducted on May 6th over a period of 24 hours.

Some 84 per cent of respondents said they would consider installing a contact-tracing app.

The Health Service Executive is developing such an app to help curb the spread of Covid-19.

Bluetooth technology would allow phones with the app installed to make an anonymous “handshake”, which would be used to measure how close they are and for how long.

This information would then aid contact tracers to quickly trace people a confirmed case of Covid-19 has met.

Minister for Health Simon Harris has said a quarter of the population would need to download the app in order for the app to be effective.

Joint research lead on the survey Prof Anthony Staines said: “The response from those surveyed appears to be quite positively disposed towards installing a contact tracing app, on the premise that it would lead to a lifting of restrictions.

“We understand that plans are in place to roll out a contact-tracing app, with an opt-in clause, and it will be interesting to ascertain the depth of the digital divide nationwide with it.”

More than 60 per cent of respondents reported that they were feeling more anxious since the start of the coronavirus pandemic, with the vast majority (78 per cent) worried about catching the virus or a family member catching the virus.

Researchers attributed this to a greater change in circumstances for younger as opposed to older respondents.

Another 10 per cent of respondents reported increased tension in their household since the start of the pandemic.

Walking remained the most popular leisure activity (93 per cent). Indoor exercise was done by about 53 per cent of respondents; 29 per cent played board games; while 64 per cent took part in gardening; and 38 per cent did DIY.

Among the respondents there were more than 1,500 parents with children in primary school.

Trinity College Dublin to resume with as much face-to-face teaching as possible 14:42
No personnel have rejoined Defence Forces under scheme, Dáil told 15:05
Covid-19: Harris urges people not to think it’s ‘mission accomplished’ ahead of next phase 13:36
Dáil observes minute’s silence after death of George Floyd in the US 13:34
End ‘shameful stand-off’ over pension for Troubles’ victims, Johnson told 12:39