If Travis McCready’s US event goes ahead, it will look very different from typical rock gigs 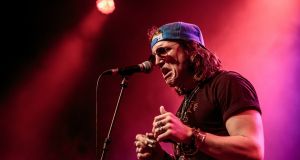 The first big “socially distanced” concert in the US since the coronavirus lockdowns is set to take place this week, providing a glimpse into the future for the live music business that has been rocked by the pandemic.

Travis McCready, a blues-rock musician, aims to play a show for a couple of hundred people in Fort Smith, Arkansas – a feat that his tour promoter says “represents hope”, and perhaps a path forward, for the battered industry.

Arkansas is one of the earlier US states to loosen the lockdown restrictions, with some theatres and arenas allowed to reopen on May 18th. McCready remains in talks for final approval to take the stage, after a series of tussles with local government that culminated in a cease-and-desist order last week.

If the show does go on, it will look vastly different from the sticky floors and sweaty crowds typical of a rock concert.

The venue, a historic art deco building, will be disinfected with “fog sprayers” before the gig. Guests will wear masks and have their temperature taken upon arrival. The audience will be divided into the groups they came with, and kept six feet apart in the crowd. Beer will be pre-packaged.

The venue will be kept to a maximum of 20 per cent of its normal capacity, or about 230 people. While McCready is keen, larger acts may be more hesitant to play shows with only a fraction of the audience.

“Our clients do not necessarily want to be playing to quarter-filled houses,” said Bill Zysblat, manager to bands such as The Rolling Stones. “When the audience can’t jump up and down and scream, it’s not enjoyable for anyone.”

There is also a question of how much financial sense it makes.

The live music business, which made €26 billion in sales globally last year according to PwC, has been brought to a virtual standstill. The carnage has hit the largest groups, such as Live Nation, as well as local clubs and concert halls, and interrupted the incomes of musicians globally.

“I don’t expect these 20 per cent capacity shows to be profitable,” said David Snowden, an analyst at S&P. However he added: “But I’m not sure that profitability is the goal at this stage. The goal is to get started, learn how to hold these shows, and gain confidence from consumers.”

Shares in Live Nation, the dominant concert promoter, have dropped nearly 50 per cent in the past three months, as planned blockbuster tours by stars such as Justin Bieber and Taylor Swift have been scrapped. S&P predicts that Live Nation’s revenues could fall by between 65 and 80 per cent this year.

The company has signed fresh credit facilities and issued debt to weather the storm, while taking a $500 million (€460 million) investment from Saudi Arabia’s sovereign wealth fund.

The McCready show has encountered many bureaucratic obstacles along the way. The show was originally scheduled for May 15th – three days before the state was lifting restrictions on arenas and theatres. The governor placed a cease-and-desist order to block the concert, and the two sides are now in talks for a new date this week.

Promoter TempleLive argued that it was unfair to allow churches to reopen while outlawing concerts. “The virus doesn’t know whether it’s in a church or a high school gymnasium or a music venue,” said Mike Brown, vice-president of TempleLive.

Most executives in the music business do not expect the biggest tours to go ahead until next year. Beyond the risk for audiences, big tours like that of The Rolling Stones require hundreds of staff working in close quarters, carrying equipment and setting up stages.

“Of course everybody wants to get back to work. [Musicians] can’t record. They can’t tour. They’re sitting home writing songs,” said Mr Zysblat. “But we aren’t curing cancer here. No one should be endangered by a rock n roll show.” – Copyright The Financial Times Limited 2020