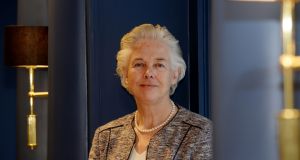 Catherine Day chairs an expert group set up to examine how to reform the direct provision system. Photograph: Alan Betson

An expert group set up to examine how to reform the direct provision system has said the coronavirus pandemic has exposed the “unsuitability” of the current system, in a recent briefing note on its work.

The group was set up late last year and is chaired by Catherine Day, former secretary general of the European Commission, and includes other former senior civil servants, and refugee and migrant rights organisations.

The group intends to recommend set time limits for the different stages asylum seekers await decisions on their applications, according to a briefing note from Ms Day sent to Oireachtas members on Friday.

Direct provision, the system of accommodation for asylum seekers, has long been criticised by campaigners for leaving applicants waiting years for decisions on their cases, and for poor standards in some accommodation centres.

“Lengthy processing times for protection applications, both at first instance and at appeal, are problematic for applicants,” due to impacts on their mental health, or loss of skills, the briefing said. The long waiting times were also a “problem for the State in terms of cost and public concern,” the document said.

Reducing waiting times on decisions would require extra resources and the use of “IT solutions,” it said.

The group had been scheduled to issue a final report at the end of the year, but has accelerated its work and plans to complete the report by September.

The current system of housing asylum seekers in centres across the country, many of which are run by private contractors, is anticipated to cost the State €200 million this year, the briefing note said.

“The lack of permanent core capacity to house asylum seekers has led to the use of accommodation that is not suitable for families or single people,” Ms Day said.

“This unsatisfactory situation has been exacerbated by the current general housing shortage and recourse to emergency accommodation and more recently by the Covid 19 situation,” the briefing note stated.

The group is considering recommending the use of public land to build accommodation for asylum seekers while they were in the system, or for local authorities to provide housing, it said.

The direct provision system has been at maximum capacity due to an increase in applicants, with the Department of Justice relying on hotels and B&B accommodation to cope with extra demand since September 2018.

The briefing note said currently 1,647 asylum seekers were being housed in emergency accommodation.

The expert group listed several measures that could be introduced immediately to improve the direct provision system.

These included extending the right to work for asylum seekers to everyone currently in the system. New applicants should only have to wait three rather than the current nine month period before they can work in Ireland, the group recommended.

Asylum seekers reported difficulties acquiring driving licenses “because the Road Safety Authority refuses to recognise the proof of residency” that residents could provide, the briefing note said. The group recommended that “this discrimination should be ended now.”

New standards for direct provision centres are to come into effect in January 2021, and the expert group said it understood the Health Information and Quality Authority (Hiqa) would be conducting independent inspections of centres.

Minister for Justice Charlie Flanagan said he welcomed the briefing note from the expert group, “as we believe that root and branch reform of the system and the policy behind it is required.”

GAA club in north Cork confirms positive Covid-19 case 22:51
Luke Kelly sculpture at North Wall vandalised for seventh time 21:56
US passengers fly into Dublin: ‘I’m here for six days. I guess I’ll have to stay inside’ 21:20
Football club raffles house in Donegal to raise funds 21:07
State commemorates Irish who died in past wars or on duty with UN 20:54