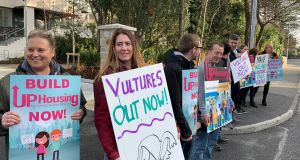 The cathaoirleach of Dun Laoghaire-Rathdown County Council has defended the decision to sign a long term lease on the Herbert Hill apartment complex in Dundrum, saying the council’s immediate concern is to secure housing for the 4,500 people on the social housing list.

About two dozen protesters gathered outside the Dundrum complex on Saturday to voice their opposition to the council’s decision to enter into a 25-year leasing agreement with the German fund Realis which recently purchased the property for over €55 million.

The Herbert Hill apartments are now set to be used as social housing with the council reportedly paying monthly rents of some €2,000 for one-bed apartments, €2,500 for two-bed units and €3,000 for three-bed units. However, protesters argue that rent paid by the council over the next 25 years will end up exceeding what Realis paid for the complex, which stands in a prime location next to Dundrum Town Centre.

Fine Fáil Councillor and DLR Cathaoirleach Shay Brennan said the aim was to balance the urgent housing needs of local families with “value for money”.

“There’s a need for housing and the most efficient way to deal with that is to actually engage in a programme of building housing,” Mr Brennan said.

“The problem is that takes time and we need to balance the urgent requirement to provide housing to those on our DLR housing list with the value for money effect.

“We’re getting the housing at low market rates and also benefitting from the fact that the landlord is required to carry out maintenance. This removes a long term cost from the DLR.”

Mr Brennan acknowledged that it was unfortunate the council was leasing from “a foreign cuckoo fund” but his immediate priority was finding housing for homeless families.

Details of the plan were first reported by The Irish Times last June. On November 29th, the council released a statement confirming the delivery of 87 “A-rated homes” at Herbert Hill which were being provided under the terms of the Government’s enhanced long-term leasing agreement introduced by the Department of Housing as part of its Rebuilding Ireland programme.

Mr Brennan said he supported the Government’s leasing agreement “in moderation” and in a balanced way. “There is an urgent need but it has to balanced with value for money. Purchasing ready-built housing is a welcome short-term option but not in the long-term future.”

Éirigí member Brian Leeson, who organised Saturday’s protest, described the deal as a “scandalous waste of public money” and called on the council to renegotiate the deal and bring the property into public ownership.

“At the end of the 25 year lease the state will be left with precisely nothing,” said Mr Leeson. “No matter what they spin it, the Government is effectively buying Herbert Hill for a vulture fund.”

He said people were incredulous that the council was willing to spend “three times in apartment rent what it would cost to build a home”.

He said: “We would argue that Herbert Hill should be taken into public ownership and the council should renegotiate the contract and just outright buy it. I know 25 years sounds like a long time but it’s rearing your kids and then potentially facing eviction.

“When you get a council house it’s your forever home; you can expect to live out your days in that dwelling. They should be made into forever homes.”

Herbert Hill is the second investment by the German Realis fund which agreed last month to the forward purchase of 56 private rented sector apartments in Dublin’s south docklands. These are expected to be leased to highly-paid tech workers in the city centre.