Local authority aims to secure all 90 units in Dundrum development 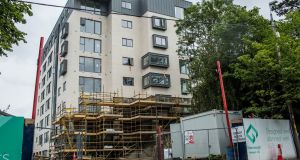 Dún Laoghaire-Rathdown County Council is pursuing a plan to secure all 90 units at an apartment scheme beside Dundrum Town Centre for social housing. Nearing completion, the Herbert Hill scheme, by publicly-listed developer Glenveagh, made headlines when it emerged that it would be sold in a single block to the private rented sector as opposed to being offered for individual sale.

A number of institutional buyers are understood to have expressed interest in acquiring Herbert Hill on that basis., However, Dún Laoghaire-Rathdown council has added a new dimension to the sale process with an offer to lease the exclusive scheme in its entirety for use as social housing.

Council officials are understood to have made the proposal to Glenveagh itself in the first instance, with a view to entering into a long-term lease with the company for all 90 apartments. When that offer was rejected it was agreed by the parties that the social housing strategy could be used as a pitch to secure a buyer for the south Dublin development.

It is understood that Glenveagh remains open to offers from investors targeting the private rented sector, notwithstanding the potential attractiveness of the council’s plan.

The details of the social housing proposal are outlined by Davy Corporate Finance in a teaser document which it circulated to a select group of institutional investors and high net worth individuals in recent weeks.

The plan’s key selling point, according to the prospectus, is that it will provide the buyer of Herbert Hill the guarantee of a 25-year stream of rental income, linked to inflation and underpinned by what it describes as a “quasi-government backed tenancy covenant” from Dún Laoghaire-Rathdown County Council.

While Davy says in the document that the apartments at the south Dublin development could deliver gross rental income of some €2.8 million on the open market, the guaranteed income from the council is being set in the region of €2.1 million. It is understood this figure would see the council paying monthly rents of some €2,000 for one-bed apartments, €2,500 for two-bed units, and €3,000 for three-bed units.

A cursory examination of the listings on Myhome.ie show there are just four two-bedroom apartments currently available for rent in Dundrum at rates ranging from €2,100 to €2,500 per month.

The document also indicates that Dún Laoghaire-Rathdown County Council would also commit to repairing, maintaining and managing the scheme for the entire 25-year duration of its lease.

Highlighting the benefits of the local authority’s interest in securing the Dundrum development for its social housing stock, Davy notes this would give the buyer of Herbert Hill “predictable, contracted, inflation-linked income” that is effectively protected against the usual exposures to the property cycle that landlords face.

With Dún Laoghaire-Rathdown County Council committing to rent all 90 units at the scheme, the owner of Herbert Hill would never have to face the losses associated with vacancies or the costs associated with re-letting.

The council’s interest in securing the apartments at Herbert Hill is put in context in the Davy document with a reference to demand for social housing being a “key area of political pressure” and a “high-profile issue of public interest”.

The council’s figures for 2018 showed that there were 4,524 people on its social housing waiting list.

Spokesmen for both Dún Laoghaire-Rathdown County Council and Glenveagh Properties declined to comment on the matter when contacted by The Irish Times.