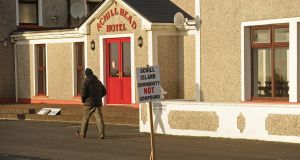 The Department of Justice and Equality signed a three-month contract with the owner of the Achill Head Hotel for the use of the premises for emergency direct provision accommodation. Photograph: Conor McKeown

The Government is paying up to €350,000 for accommodation for 38 asylum seekers in a hotel in Achill, Co Mayo, even though none of them have taken up their place there because of local protests.

In October, the Department of Justice and Equality signed a three-month contract with the owner of the Achill Head Hotel for the use of the premises for emergency direct provision accommodation.

Thirteen women were due to arrive on October 25th. They were to be followed a week later by 25 people, comprising of family groups. To date, none of them have arrived because of the protests.

Based on the average cost of emergency accommodation for asylum seekers per person, per night, and, also, on the basis of off-peak accommodation on the island, the cost is estimated to be in the region of €350,000.

A 150-strong group, Achill Community Group Silent Vigil, has protested outside the hotel 24 hours a day since news broke locally of the plans to use it for temporary emergency accommodation.

In August, the Department of Justice published their 2019 spending review on the cost of direct provision. In 2018, expenditure on direct provision had reached €78 million. Costs this year could exceed €120 million.

The increased bill is partly blamed on the need for emergency accommodation for international protection applicants against the backdrop of “a housing crisis and a healthy tourism sector”. Average prices are “approximately €100 per person per night”.

The Department of Justice would not confirm the cost of the three-month Achill contract, saying that “commercial sensitivity” rules meant the figure could not be given for two years.

Due to “a very high volume” of asylum applications, the department said it had entered into short-term contracts with a number of hotels to provide emergency accommodation “pending spaces becoming available in established centres.

“We cannot, unfortunately, provide this contracted temporary shelter to applicants while protests are taking place as the small group of applicants involved would be vulnerable in such a situation,” it added.