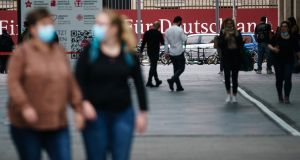 A Berlin shopping mall this week. Services activity fell this month in Germany and France, the euro zone’s two largest economies, as the sector bore the brunt of new restrictions and of weak consumer confidence as job losses continued to rise. Photograph: EPA

Business activity in the euro zone has slid back into decline, according to a widely-watched survey, as rising coronavirus infections and tighter curbs weigh on the bloc’s economy, increasing pressure on the European Central Bank to consider more monetary stimulus.

The IHS Markit flash euro zone composite purchasing managers’ index fell to 49.4 in October, its lowest level since June and down from 50.4 in the previous month. A reading below the 50 mark indicates a majority of businesses reported a contraction in activity compared with the previous month.

The drop was driven by a contraction in services activity, which was steeper than economists had expected, although it was partly offset by resilience in manufacturing.

“The euro zone is at increased risk of falling into a double-dip downturn as a second wave of virus infections led to a renewed fall in business activity in October,” said Chris Williamson, chief business economist at IHS Markit.

The bloc faces “a tale of two economies”, as manufacturers enjoyed the fastest growth since early 2018 as orders surged amid rising global demand, he said, but “intensifying Covid-19 restrictions took an increasing toll on the services sector, led by weakening demand in the hard-hit hospitality industry”.

The index for euro zone services fell to a five-month low of 46.2, down from 48 in September. Economists polled by Reuters had expected a reading of 47.

Services activity fell in Germany and France, the euro zone’s two largest economies, as the sector bore the brunt of new restrictions and of weak consumer confidence as job losses continued to rise.

In contrast, activity continued to expand in the euro zone’s manufacturing industry; the sector’s index rose more than expected to 54.4, up from 53.7 in September.

The performance was patchy, however. A sharp rebound in exports, particularly to a resurgent China, helped to boost activity in Germany’s large manufacturing sector, but French manufacturers reported their steepest falls in export orders since July.

Germany’s composite PMI dipped to 54.5, indicating that overall business activity continued to expand as the rapid growth in manufacturing offset the slowdown in services. However, France’s composite reading slumped to a five-month low of 47.3, pointing to a sharper slowdown in economic activity.

The figures raise pressure on the ECB to consider more monetary stimulus when policymakers meet next week. Its president Christine Lagarde said this week that the resurgence of the pandemic was “a clear risk” for the economy. However, the central bank is expected to wait until December before expanding its bond-buying plans.

“The road ahead for the euro zone will be bumpy,” said Nicola Nobile, economist at Oxford Economics. “Activity in the services sector contracted strongly, continuing with a trend that started after the summer ... This dynamic will very likely continue in the coming months, given the sharp rise in cases across Europe over the past few weeks.”

Governments across Europe have this month tightened restrictions on people’s social activity and movement as the number of infections has hit record highs in several countries.

However, as with the Republic, most countries have refrained from closing schools, construction sites or non-essential factories – many of which were shut during the first wave – in an effort to avoid the economic impact of stricter lockdowns.

Jack-Allen Reynolds, economist at Capital Economics, said he expected euro zone “economic activity will stagnate” in the fourth quarter, but the spread of the virus despite the latest restrictions meant “the risks are skewed to the downside”.

Flash PMI estimates are published one week before the final results and are based on about 85 per cent of the typical responses. – Copyright The Financial Times Limited 2020