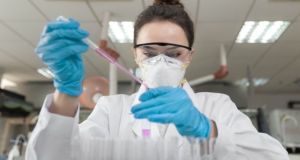 One of the country’s main labs used to process coronavirus tests has said it will be unable to operate over the next two weekends, due to “unavoidable staff shortages.”

In a notice published on its website, the National Virus Reference Laboratory (NVRL) said it would not be able to process Covid-19 tests over the coming bank holiday weekend, including Monday.

The lab would also be unable to operate on Saturday and Sunday of next weekend as well, October 31st and November 1st, the notice said.

The halting of testing over the two weekends in the University College Dublin (UCD) lab was a result of “unavoidable staff shortages,” the notice said.

The notice, posted on Thursday, apologised for the “late notice and for any inconvenience this may cause.”

One health source said it was expected Enfer, a private facility in Naas, would be able to cover the shortfall in testing capacity from the closure of the UCD lab over the two weekends.

There is capacity in more than 40 laboratories to conduct coronavirus tests, between the UCD lab, acute hospitals, Enfer, and a Department of Agriculture facility.

Dr Cillian De Gascun, director of the NVRL, told The Irish Times the lab processed on average between 700 and 1,000 tests a day. The numbers were usually lower at the weekend, processing between 600 and 700 a day, he said.

Dr De Gascun, who also sits on the National Public Health Emergency Team, told RTÉ’s News at One that there had been a “small number” of confirmed coronavirus cases among lab staff at the start of this week.

“Since March of this year we would have been split into two teams, so earlier this week when we identified the cases, the team that was affected would have been taken out of the lab and the alternative team would have been brought back in,” he said.

“And in essence with the team that’s affected restricting movements for the next 14 days, we really felt in order to give our existing team an opportunity to deliver the service during the week and also to have some time to recover, that we would suspend testing on this coming weekend and the following weekend, following which the original team will be able to return to work,” he said.

The suspension of testing was “not ideal”, but the shortfall would be made up by Enfer and acute hospital labs, he said.

“Demand typically falls off to a degree on Saturday and Sunday so it was decided that would be the best time for us to give those staff who will not have to work for two weeks continually a little bit of rest time,” he said.

“The thing to highlight is that we agreed this with the HSE to ensure that there would be no impact on the testing capacity over the course of the relevant timeframe,” Dr De Gascun said.

In the Dáil, People Before Profit TD Richard Boyd Barrett read out the notice from the UCD-based laboratory adding it was the failure of the Government to recruit enough people to build up the testing capacity to the degree necessary to fight Covid-19.

“In the same way if the infection rate is running riot we have a very significant amount to do in order to trace close contacts.

Sinn Féin’s Louise O’Reilly said she was very disturbed to learn that the laboratory could not process the swabs.

She asked if Minister for Health Stephen Donnelly was aware of the NVRL notification and called for him to set out the steps taken to ensure the processing of tests.

Ms O’Reilly said “we have already seen the shambles with tracing but testing is absolutely essential”.

She added: “I want to ask what efforts have been made to address the short staffing, the fact that they’re short staffed in the National Virus Reference Laboratory is I think very concerning but I want to know what it is that is being done to ensure that the issue is going to be addressed and that the staff are going to be available.”