Immigration services have ‘stopped completely’ in Venezuela, making them ‘impossible’ to obtain 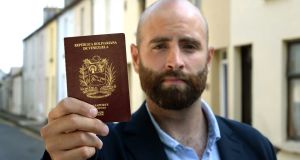 Juan Ayala, with his Venezuelan passport which is due to expire soon, pictured in Drumcondra, Dublin. Photograph: Dara Mac Dónaill

Venezuelans in the State say the Government should let them renew their permission to live here using expired passports given that immigration services in their home country have “stopped completely” and extension stamps have “become almost impossible to obtain”.

Juan Pablo Ayala, who has co-founded a campaign to raise awareness of Venezuelans caught in this state of limbo, says barriers to visa renewals for Venezuelans have reached “critical levels” with waiting times for a new passport taking up to two years.

“We are scared, we don’t know what to do and we depend on these documents,” Mr Ayala told The Irish Times. “We could lose everything we’ve done. Plenty of these people have lived here for so long.”

Non-EEA nationals living and working in Ireland must present a valid, in-date passport to renew their Irish Residence Permit (IRP). However, with Venezuela still deeply entrenched in economic and political crisis, securing a new passport has become almost impossible for nationals living abroad.

In November 2017, the Venezuelan immigration and passport authority suspended passport appointments indefinitely due to a lack of materials to produce the booklets and announced a new system of two year passport extensions. However, with no consular representation in the State, this extension is practically useless for Venezuelans in the Republic as they must travel to an overseas embassy to make the application – a journey they cannot make if their passport has expired.

Venezuelans living in the State, including those married to Irish and European nationals, now risk becoming illegal in this country because of their out-of-date documentation.

Mr Ayala says some Venezuelans are reluctant to submit their expired passport to the Government for consideration as they fear being deported for overstaying their visa. Many also fear losing their permission to work in Ireland, he says.

In an email sent to Minister for Justice Helen McEntee in July, Mr Ayala’s group, which represents nearly 180 Venezuelans, called for a “general policy of granting Venezuelan citizens living in Ireland the possibility of renewing their IRP card” even after their passport has expired and “offering a sufficient extended permission period for us to be able to do our due diligence in order to obtain our new passports or extensions”.

A number of European countries have started accepting expired Venezuelan passports for visa renewals given the country’s “ongoing difficulties”, notes the group. In late August, the UK immigration office announced that Venezuelan passports issue or expired on or before May 2019 “may be considered valid by UK for 5 years beyond their expiry date”.

Mr Ayala, who has lived in Ireland for seven years and whose passport expires in November, would like to see the Government make similar allowances for Venezuelans in Ireland.

Kira Aguilar, who has worked in Ireland’s aeronautical engineering industry since 2017 on a critical skills work permit and is engaged to an Irish man, says she is “basically locked” into Ireland as she does not have enough blank pages in her passport to secure the two-year extension from her home country.

Ms Aguilar’s passport does not expire till June 2021 but she is not entitled to apply for the extension until six months before the expiration date.

“Getting a new passport is impossible right now so the only option is to apply for the extension in January. But that can take between nine months and a year to arrive.

“With my job I need to travel at least every month for conferences. And because I’m not European they stamp my passport everywhere I go. I used to renew my passport almost every two years because all the stamps in one booklet is a nightmare.”

Asked to comment on the situation, a Department of Justice spokesman said the Government was “keen to do what we can to facilitate Venezuelans who want to stay here”.

A six month immigration permission can be issued pending the receipt of a new passport and Irish immigration services will register this permission while a person is awaiting their passport, said the spokesman.

The department looks at cases of undocumented or illegal persons in the State on a “case by case basis and has consistently urged anyone in this position to come forward if they wish to apply to regularise their position,” he said.