Men account for almost 80% of suicides recorded in State 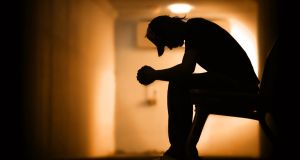 Men accounted for almost 80 per cent of the suicides recorded in the State last year, provisional figures from the Health service Executive show.

The number of cases of suicide has stabilised since the recession with 399 last year in comparison with 451 in 2015 and 554 in 2011, according to the National Office for Suicide Prevention (NOSP) annual report. Of the 399 recorded suicides last year, 318 (79.6 per cent) involved men.

The report said the highest rates of suicide were recorded in Limerick city, Roscommon and Cavan between 2014 and last year, and that the lowest rates were in Dún Laoghaire-Rathdown, Waterford City and Fingal.

However, the figures from 2012 onwards “indicate a levelling-off of this rise”, she said, with provisional figures for the last two years suggesting “a decreasing trend in Ireland’s suicide rate”.

The report showed there were 486 confirmed suicide deaths in the State in 2014, some 82 per cent of which were among men.

The HSE said the high male-to-female ratio has been a “consistent feature” of deaths by suicide over the years. The highest rates of suicide were among 45-54-year-olds, while the lowest were recorded among those aged 65 years and over.

Assistant national director for NOSP John Meehan said the links between the 45-54 age group and suicide are “multifaceted”.

“One of them would be the squeezed middle, a lot of those within that category would have businesses that maybe were hit by the recession,” he told The Irish Times. “Stigma is another factor, particularly men actually not attending services. I’m in that age category and a lot of people in that group try and deal with things themselves.

“Prior to the boom, the age range [with the highest suicide rates] was from 18 to 24, that’s now moved up. We have to delve into the evidence to see what the other precipitating factors are.”

The National Self-Harm Registry Ireland recorded 11,485 presentations to hospital due to self-harm involving 8,909 individuals last year, which is in line with figures for 2015. There was a 19 per cent increase between 2007 and 2012 in the self-harm rate in Ireland, with the largest increase seen among men.

The HSE said more than €11 million was invested in suicide prevention last year.

Minister of State for Mental Health and Older People Jim Daly acknowledged “we do need to do a lot more work in our [mental health] referrals to make sure that we appropriately refer”.

“We need to look at how we are referring and where we are referring. I think we need to have a front-door portal type where we need a single phone number that everybody can dial, and that’s the number that everybody recognises and they will be appropriately referred somewhere in their community,” he said. “Our team in the HSE and the officials in the department are setting about that particular challenge.”

The NOSP has said its priorities for the next year include developing a campaign to reduce stigma to those with mental health difficulties and suicidal behaviour, launch a new online suicide awareness training programme and support the development and implementation of 21 local action plans around the country.