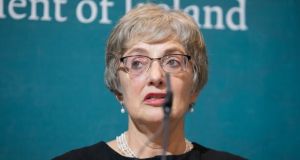 Minister for Children Katherine Zappone: she has said an independent investigator will look at a “targeted sampling” of files. Photograph: Gareth Chaney/Collins

The terms of reference for a sample investigation of adoption records has been dismissed as “shameful” by campaigners, who have called for a more wide-ranging inquiry.

On Friday, the Minister for Children Katherine Zappone said an independent investigator would look at a “targeted sampling” of files to examine incorrect registrations of births and report back in four months’ time.

An exact methodology for that initial sample examination has yet to be agreed upon.

However, the Coalition of Mother and Baby Home Survivors (CMABHS), an umbrella organisation for various adoption campaigners, rejected the terms of reference.

“The so-called ‘sampling’ of a handful of Tusla and Adoption Authority [of Ireland] files is a shameful cop out, and a full and through investigation needs to take place immediately,” it said in a statement.

The Minister has appointed an independent reviewer for an “initial analysis” of a sample of records to establish whether there is “sufficient reliable evidence of the practice that could be extracted from the records of other adoption agencies”.

“Clearly it would be a huge task to carry out a detailed examination of some 150,000 records dating back to the 1990s, so a targeted sampling exercise of the records in the possession of Tusla and AAI is prudent in the first instance at least,” the Department of Children said.

It said a sampling exercise was planned due to the “huge volume” of files involved – 70,000 records at Tusla, 30,000 at the Adoption Authority of Ireland (AAI), and 50,000 across a wide range of existing and former adoption agencies.

It follows the discovery by Tusla of documentary evidence of a number of incorrect registrations of births from the records of St Patrick’s Guild, a former adoption agency, between 1946 and 1969. In these cases identification was possible because of a marker placed on some files specifying adoption at birth.

“While the practice of incorrect registrations has been extremely difficult to prove in most instances because of the deliberate failure of those involved to record any information about it, the label in SPG [St Patrick’s Guild] records has made it possible to identify possible cases and to pursue them further,” the department said. Its sample inquiry will examine the further potential application of this discovery to other files.

Marion Reynolds, former deputy director of social services in Northern Ireland, will undertake the review, and will report to the Minister within four months.

A sample set of records will be “defined” in an agreed methodology. Its outcome could include further more detailed analysis of records to establish the potential to determine the extent of incorrect birth registrations.

Adoption campaigners have criticised Dr Zappone for failing to consult with them, and for the what they described as the narrowness of her plans.

The CMABHS said the sampling of records ignored the fact many of them remained in the hands of private adoption agencies “who are being given the time and space to ‘audit’ their own files and ‘correct’ so-called wrongful registrations”.

It has said a preferable course of action should be that the terms of reference of the current Inquiry into Mother and Baby Homes should be expanded to investigate issues of illegal adoption.

Clodagh Malone, of the Beyond Adoption Ireland group, said the “lack of communication and consultation with survivors is not helping but causing hurt and harm”.

A spokesperson for the Department of Children could not be reached for comment.