How the death of Savita Halappanavar revolutionised Ireland 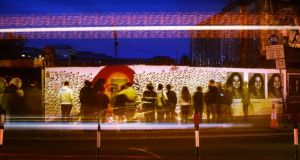 Among the messages fixed to a mural of Savita Halappanavar in Dublin this weekend was one stating simply: “Sorry we were too late. But we are here now. We didn’t forget you.”

In years to come, when we look back at the significant women of our history, Savita will be among them.

The Aches mural, beside the Bernard Shaw pub in Portobello, became a focal point of remembrance of her over the weekend, as people gathered, laid flowers and left hundreds of messages – of both sorrow and gratitude.

Fiercely contested as the narrative of her death has been, the facts as first reported in The Irish Times on November 14th, 2012, never were.

Ms Halappanavar presented at Galway University Hospital with severe back pain on October 21st, 2012, and was found to be miscarrying her 17-week pregnancy.

After a day in “agony” and distress, she asked for a termination but was refused because there was a foetal heartbeat. She was again refused the next day because of the heartbeat. Doctors checked for the heartbeat several times a day, as Savita grew increasingly ill.

On the third day she spontaneously delivered a female foetus and went into a coma, before being transferred to the high-dependency unit and then intensive care, where she deteriorated into septic shock, multiple organ failure and died of cardiac arrest at 1.09am on October 28th, 2012.

The Wednesday evening the story broke, thousands gathered in silent vigil outside Leinster House, carrying her picture and lighting candles. The following Saturday up to 20,000 people marched in Dublin, with simultaneous demonstrations across the country, chanting “Never again”.

“It was a national outpouring of grief and devastation,” says Rita Harrold (28), who with other young women founded the Rosa socialist feminist movement in early 2013. “After her death there was a real determination to fight for full abortion rights.”

Rosa, affiliated to Solidarity, campaigned for the repeal of the Eighth Amendment since. So too the Abortion Rights Campaign, founded by, among others, Gráinne Griffin, codirector of Together for Yes.

The Abortion Rights Campaign had been founded in summer 2012, the 20th anniversary of the X case, amid a sense that “it was time for real change on abortion”. It organised the first March for Choice in September that year, attended by a few hundred people.

“The impact of Savita’s death the next month was a real shame we had not acted much sooner, that we had let her down and a determination it would never happen again,” says Ms Griffin.

Orla O’Connor, codirector of Together for Yes, was in her first year as chief executive of the National Women’s Council of Ireland. “Savita’s death shifted the whole conversation about abortion. People were so shocked and felt it could have happened to them. We had so many calls to the council, from men as well, asking what they could do to campaign for change.”

Irish Times Deputy Features Editor Róisín Ingle says her grief and anger at Ms Halappanavar’s death was “absolutely a huge factor” in her 2015 decision to speak publicly about having had an abortion. It was an important moment in breaking the taboo around personal abortion stories – a key factor in swaying many this weekend to vote Yes.

“I have no words to express my gratitude to the people of Ireland at this historic moment. We got justice for Savita.”

Savita’s husband, Praveen, has since remarried and is living in the US.

Taoiseach Leo Varadkar said on Saturday that a “quiet revolution” had taken place.

It has been a revolution 35 years in the making, forced on to the political agenda in recent years by thousands of activists up and down the country, who held stalls, marched, organised, leafleted, canvassed, shared their stories, and, eventually could be ignored no longer.

Many point to a young woman called Savita Halappanavar as the reason they became revolutionaries.