Adoption controversy: ‘The nun said to me, kiss him goodbye now, and she just whipped him away’ 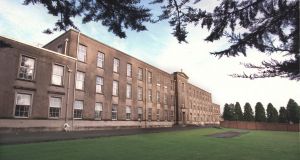 St Peter’s mother and baby home, Castlepollard, Co Longford. A stairs in the home led to a window to which young mothers used to run in order to watch their babies being taken away. Photograph: Paddy Whelan A stairs in the mother and baby home in Castlepollard, Co Westmeath, led to a window to which young mothers used to run in order to watch their babies being taken away for the last time.

The window didn’t give a very good view and usually all they could do was listen to the car driving off as the child was being brought by its adoptive parents to the United States.

The mother at the window was at the centre of a triangle of forces. These were Irish society and its prejudices; the need of the church to see children brought up as Catholics; and the State’s practice of stepping back from interference with the church.

One woman I spoke to when I covered this issue for The Irish Times in the 1990s tried to conceal her pregnancy but failed because of intense pain. The doctor was called and told her mother her daughter was pregnant. Her mother started shouting at her. The doctor said: ‘It’s not much use shouting at her, the damage is done. We will have to get her to Castlepollard.’

“A priest came to see me, he said a few words and prayed. He was very cold. He didn’t know how to cope with it. I felt fear. An ambulance came to bring me to Castlepollard. My mother didn’t come with me.

“When I arrived at Castlepollard I was approached by a nun who said: ‘Your name is Vera while you are here.’”

Changing the identities of the young women in the mother and baby homes was part of the system of concealment. So was the censoring of letters on the way in and out. And hardly anybody had a telephone anyway.

I mention this in some detail to show that young women at the time had no choice in any real sense about being brought to these homes and about their children being taken away.

And don’t underestimate the strength of the prejudice behind this. I recall my mother around 1970 talking about an “unmarried mother” who on returning to work was shunned by her female colleagues.

Concealing the birth by having the child adopted or fostered was where the nuns came in. From the point of view of the church and in particular of Archbishop John Charles McQuaid, the imperative was that babies should be adopted and raised by Catholic families. He did not want to see Catholic babies going to Protestant families in Ireland, North or South.

The adoption law meant children could only be adopted abroad after they were a year old. For this reason, mothers had to raise their children in the mother and baby home until a year had passed and then an adoption to a Catholic family in the United States could take place.

I needn’t dwell on the cruelty of this system.

The parting was particularly cruel. “The night before he went, his clothes were left out and you were told to be up at 6.30 to bathe him and get him ready for going to America,” the mother quoted above said. “I didn’t sleep that night.

“I remember getting up and going in to bath him and dress him. I remember the little beige coat and the little bit of velvet on the collar, brown shoes and beige socks.

“I carried him over to the door. The nun said to me, ‘kiss him goodbye now’, and she just whipped him away.

“I ran up to a window to try to see him, I was almost getting out the window. But I couldn’t see. All I could hear was the engine of the car. I kept listening until I couldn’t hear it any longer.”

I should add that many adoptions were by families in Ireland but the system of concealment was the same, even extending, as we now know, to falsifying birth registrations in some cases.

The State’s policy of staying out of what it saw as the affairs of the church didn’t stop it from helping out the church. According to Mike Milotte’s book Banished Babies, the Adoption Act was heavily influenced by McQuaid to allow for the adoptions to the United States.

There was also a view that adoptions, once they happened, should be forgotten about. Tom Woulfe, the first registrar of the Adoption Board and who continued in that job from 1953 to 1979, told me in 1997: “I believed for years that it was best that the shop should be closed and the key thrown away but I was wrong. It’s not as simple as that.

“We were living in a society 56 years ago when the accent was on concealment.”

He quoted an instance of a parent who wrote to him saying she was now married with five teenage children and that she dreaded the idea of the adoption being found out about by anybody. “I would prefer to spend my eternity in hell rather than that my husband and family should know about this.”

If religious orders and congregations were responding to the prejudices of society, what do we have to complain about?

In 1997, in response to queries from this newspaper, St Patrick’s Guild admitted that some of its files contained misleading information.

Blocked at every turn

This information made it practically impossible for people to find each other following an adoption. One birth mother whom I had contacted through Barnardos desperately wanted to make contact with her son but was blocked at every turn. I heard later that when she eventually got the information she needed, she found that her son had died a few years previously in the US.

It is difficult now to believe that all of this was going on during the era of the Hucklebuck, the show bands, Joe Dolan and the Drifters, the Beatles, the Rolling Stones, flower power and the hippies.

Change was stirring, though. Máiréad Ní Ghráda’s play An Triail about a single mother who kills herself and her child in despair was hugely influential in the 1960s.

Liberal voices such as that of Fr Fergal O’Connor began to call for a better deal for these women and their children, a call for which Gay Byrne gave him a platform on The Late Late Show.

Cherish, founded in 1972 by a group of single mothers led by Maura O’Dea Richards with the support of Mary Robinson, also played a huge role in changing attitudes. One of its founders, Colette O’Neill, suggested the name Cherish as a reference to the 1916 proclamation’s pledge to cherish all the children of the nation equally. (Cherish is now called One Family. )

In the end it was changes in society that began to sweep away this whole horrible system of concealment and of pain.

But many of the people who were swept away in that wave are with us and are reading and hearing these stories today and many of them are in pain today.

That girl is still at that window.