Alphonsus Cullinan questions ‘the critical thinking ability of the Irish’ 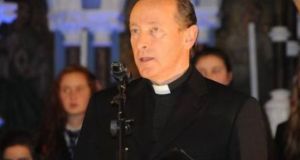 The Catholic Bishop of Waterford has questioned the ability of Irish people to think critically, accusing some Yes voters in last week’s abortion referendum of “culpable ignorance”.

He agreed with Bishop of Elphin Kevin Doran that Catholic Yes voters needed to attend confession, and he criticised the national media for lack of balance during the referendum campaign.

Speaking on Waterford local radio WLR FM, Bishop Cullinan said:“Let’s face it, euthanasia has now been accepted in this sense that we have accepted - the majority of the Irish people - that some life is not worthy of life.”

He was, he said, “horrified to see the jumping and roaring and cheering in Dublin Castle last Saturday. I mean how can you cheer about abortion? I don’t think that’s good.”

On Bishop Doran’s call for Catholic Yes voters to go to confession, he said “I think he’s right. I have to agree with Bishop Kevin. I mean, what is abortion? It is the intentional taking of a human life, it’s not accidental.”

With all the talk during the campaign “people cannot claim ignorance. If they do it is culpable ignorance. This is a very serious issue and if people have knowingly and willingly voted Yes, well then they have to examine their conscience, go before the Lord and say, Lord we got this wrong. I do believe that.”

Such people “should talk to the priest, they should go to confession” before receiving Communion.

Quoting St Paul, he said “to receive Holy Communion unworthily is a very serious matter for which you’ll have to answer”.

The bishop said he was preparing a document on the matter which would be published next week.

When it was put to him that 82 per cent of voters said in exit polls they were well informed on the referendum issue, he asked: “What is the critical thinking ability of the Irish? Do we think things through? Do we accept an objective morality or do we make up our own?”

He said: “I think now people just make up their own morality and that in many ways is frightening because it means at the end of the day it is those who are strong and powerful will dictate to the less powerful and the weak.”

On his recent refusal to allow Minister of State John Halligan be a witness at the TD’s godson’s confirmation, Bishop Cullinan said “John excluded himself from the confirmation. Someone who does not believe in God and has made it public, crystal clear in radio, television and print media, how could he stand there and want to be part of a church ceremony?

As to the future of the Catholic Church in Ireland he said “we’ll certainly be a smaller church. I think that we will be more committed. I can see so many good things happening”.

It had been said to him that if the Nos won “it could well have happened that church people would say we can relax on our oars. Now we see the extent of the problem and where Ireland is at. Maybe it’s a call to action”.