Adoption controversy: ‘My son was stolen and illegally adopted’

‘I screamed and roared at his disappearance, and a nun slapped me right across the face’ 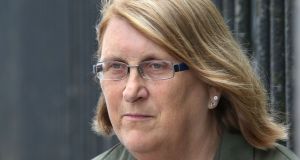 Ann Crowe: ‘I said to the nun, ‘Where’s my baby?’ And she didn’t answer me.’ Photograph: Joe O’Shaughnessy

Ann Crowe (58) had her first baby, Roger Declan, at Bessborough mother and baby home in Cork in February 1979.

Two days later, he was gone. She has not seen him since.

Now living in Annaghdown, Co Galway, she believes her son was “stolen” and illegally adopted.

She was 20 and living with her family in Galway city when she found out she was pregnant, in mid-1978. Her mother had died a few months earlier and when she told her father he brought her to Bessborough.

“He just said one day, ‘we’re going for a drive’ and he brought me to Cork. I remember going up a big, long driveway and asking, ‘where are we going?’.” He replied, ‘you’re going in here for a while’.”

Her experience at the home, run by the Sacred Heart Sisters, was “horrendous”, she says. “We were dirt to the nuns. I delivered my baby on 23rd February. I had him for 48 hours. I fed him and changed him. He was a fine healthy baby. After I’d fed him one of the nuns told me to go to the laundry on a message. I was gone a few hours and when I came back he was gone.

“I said to the nun, ‘where’s my baby?’ And she didn’t answer me. I asked her again and she said, ‘he passed away.’ I screamed, ‘what do you mean? Where is he? He can’t be dead! He was a healthy baby two hours ago!’

“I was screaming and roaring, I was panicking and the nun, she slapped me right across the face. I calmed down and said, ‘where is he then? Let me see him.’ And she said he was already buried ‘out there somewhere’; somewhere in the fields.

“I was never shown a grave. I got a birth certificate but no death certificate. He was stolen from me. He was a healthy baby. He couldn’t have died.”

A week later she returned to Galway, where she went into a deep depression. “I didn’t want to go out. I didn’t want to see anyone, didn’t want to talk to anyone, not to my father or my brothers. I saw counsellors and doctors, got a job and got my life back together.”

In 1984 she became pregnant again and was again brought to Bessborough by her father. This time, however, she had a social worker and was determined to keep her baby. Robert was born on May 18th that year.

“I placed him in foster care for a few weeks while I went home to Galway to sort things out with my father.

“He said, ‘okay, you can bring him home but there will be rules’. He didn’t want me bringing him out during the day. He didn’t want the neighbours knowing. When I brought Robert home the rules got bent. Dad fell in love with him.”

Through the years she has tried to find out what happened to Roger. She has searched records in the General Register Office, worked with adoption rights campaigner Kathy Finn and Clodagh Malone of Beyond Adoption, which helps people affected by adoption to find family members, but without success.

The confirmation, in the last week, of at least 126 illegal birth and adoption registrations at St Patrick’s Guild adoption society have “brought it all back up again”, she says.

“I feel hurt, gutted, devastated all again. I would love if they did a full excavation of Bessborough grounds, and DNA all the babies, and a full audit of all the files. I would love to find out what happened to Roger Declan, to find him.

“I don’t even have a picture of him. I have none of his baby clothes. I have nothing, but I think of him every day.

“Robert comes to see me nearly every day and I love that. When I look at Robert, I see Roger too. I see my other baby in him every day.”