‘Unprecedentedly high number’ of deaths a cause for concern, homelessness body says 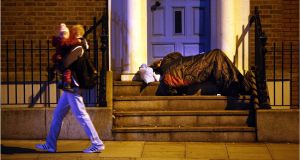 A call for the re-establishment of the Lord Mayor’s forum on homelessness in Dublin has followed the fifth death among the city’s homeless population in a week.

The call has been made by Inner City Helping Homeless chief executive Anthony Flynn, who said: “We need clear and concrete leadership on this matter.”

He also said he believed the level of deaths in the sector was seriously under-reported and has requested the Dublin Region Homeless Executive give a computer report on the number of deaths over the last month in particular.

The executive offered its sympathies to the families of the five homeless people who died “in the last week in homeless services and hospice care”.

“Five deaths in a week is an unprecedentedly high number, and is obviously a cause for concern. In all of these cases support was being offered by our homeless services, but unfortunately homelessness is often complicated by medical or social factors. Regrettably, even with the highest level of support, five people have lost their lives,” it said.

On Sunday it was confirmed that a young woman had been found dead in Dublin homeless services accommodation.

Last Tuesday the bodies of two women were discovered at the Abigail Women’s Centre on Kildonan Road in Finglas. The first woman, who was 34 years old, was discovered in her room. It is understood she was a mother and died by suicide. The body of a second woman, who was 21, was found several hours later. It remains unclear how she died.