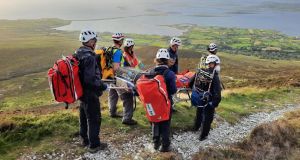 Mayo Mountain Rescue crew on Croagh Patrick: “It is impossible to treat a casualty when you are socially distanced.” Photograph: Odette Duignan

St Patrick allegedly banished snakes while standing on Ireland’s holiest mountain, Croagh Patrick, but keeping eager pilgrims away this year has proven to be as a difficult a task.

Thousands of climbers arrive at the Co Mayo mountain each year for the last Sunday of July but, amid a global pandemic, they are being asked to stay away in the interest of public health.

Saying that “tremendous” numbers have already come, local Frank McCarrick, chairman of the Murrisk Development Association, said Reek Sunday “could bring about chaos” if warnings were not heeded.

“It is definitely a concern that so many people are coming to the village. There are crowds of people here every day. Even as I look outside my window now I can see quite an amount of traffic,” he said.

“People are concerned. There are elderly residents and they are particularly vulnerable. All of my neighbours have been very careful about cocooning and not travelling. We have not had the virus. We’d like to keep it that way,” he said.

Reek Sunday brings traffic chaos every year to Murrisk, but this year could be worse since they will be without the usual overflow car park, or the 60 to 70 volunteers who annually provide assistance to pilgrims.

“There is a continuous line of cars parked along the footpath. People are not observing social distancing,” complained McCarrick about those who have already come to scale Croagh Patrick.

The 1,500-year-old tradition of pilgrimage was called off once before in 2015 due to torrential rain. However, many then ignored the severe weather warning and climbed anyway.

This time round, local gardaí are hopeful that people have heard the message “loud and clear” that the pilgrimage is off, though they will be on duty on all approaches to enforce current public health guidelines.

Local Mayo Mountain Rescue volunteer Cameron Clotworthy is concerned, too: “Normally we would have people on different sections of the mountain ready to help. We won’t be on the mountain this year.

“People should bear that in mind if they are climbing it. They might have to wait longer if we get multiple callouts,” he said, adding that volunteers must wear personal protective gear when they are on duty.

“It is impossible to treat a casualty when you are socially distanced. We have to clean down all the equipment afterwards and that limits the number callouts we can do,” Mr Clotworthy told The Irish Times.

Volunteers have their own families to mind, too, he said: “Every time we get a callout we are not just risking our own health but also the health of our families. That is something for people to bear in mind,” he said.

The Catholic administrator in Westport, Fr Charlie McDonnell, is “genuinely heartbroken” to see the pilgrimage cancelled. “It doesn’t sit well with me at all, but we have done everything we can to be responsible.”

In normal times, he said he is “awe” of the climbers: “For some people the church has become musty and priests have become stale, but there is something very special, still, about this mountain.

“People who genuinely want to climb the mountain, they can climb on other days if they want to do so carefully. On Sunday, we would encourage people to visit their local church or go for a walk and take their rosary beads with them.”