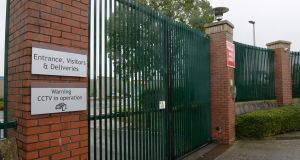 Oberstown detention campus in Lusk, Co Dublin. It can accommodate 48 boys and six girls up to the age of 18. Photograph: Dara Mac Dónaill

More than half the children at the Oberstown detention campus last year were not engaged in any education prior to being sent there, and almost a quarter had a diagnosed learning disability, according to the centre’s annual report.

It says that almost a third of the youths in the north Co Dublin centre had lost one or both of their parents, a majority had substance misuse problems, and more than 40 per cent had mental health issues.

The report, published on Thursday, says that 19 per cent of the children sent to Oberstown by the courts last year were members of the Traveller community, which accounts for just 0.7 per cent of the general population.

A total of 127 children were detained at the centre last year on foot of either remand or detention orders. Some 95 per cent (121 children) were boys, with six girls held at the centre.

Of a cohort of 75 youths in the centre during the first three months of last year, 44 per cent were aged 16 or younger, and 27 per cent were from Dublin. The children came from 16 counties.

A detailed analysis of the children there in the first quarter of last year found that 57 per cent “had not been engaged in education prior to detention and 23 per cent…had a diagnosed learning disability”.

Some 31 per cent “had suffered the loss of one or both parents either through death, imprisonment or no long-term contact; 71 per cent were considered to have substance misuse problems; 41 per cent had a mental health need, [and] 41 per cent…had either been in care or had significant involvement with Tusla prior to their detention in Oberstown”.

When a child arrives at Oberstown they are assessed by a multidisciplinary team. In 77 cases last year “concerns relating to the welfare and protection of young people” were referred on to a designated liaison person, in line with Children First legislation.

“Sixty-two of these concerns related to specific matters that occurred prior to the young person being placed on remand or detention orders in Oberstown,” the report says.

Oberstown child detention campus, located in Lusk, Co Dublin, operates under the aegis of the Department of Children and the Children Act 2001. It can accommodate 48 boys and six girls up to the age of 18.

Its mission, according to chairperson Dr Ursula Kilkelly, is to ensure “young people are supported to move away from offending behaviour to make a more positive contribution to society”.

Several programmes operate to challenge the young people’s thinking about their offending, to support them in developing coping skills, and to better manage their behaviour in threatening situations.

A victim empathy programme encourages participants to face the impact of their actions. The “decider life skills” programme uses cognitive behaviour therapy to help the young people cope better and reduce impulsivity. Other programmes teach the young people not to react violently to situations, to stop negative thinking and prepare them for leaving the detention system.

All young people there attend school, and last year 13 sat their Junior Certificate, with nine taking at least five subjects. Two sat the Leaving Certificate, and one got a third-level place.