Tusla struggled to make changes under ‘too bureaucratic’ HSE 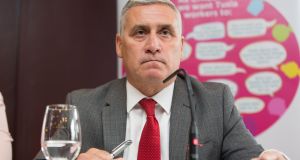 Fred McBride said that although Tusla was up and running for four years, it had spent the first half trying to keep services going and the other half attempting to resolve problems. Photograph: Tom Honan

State child protection agency Tusla spent two years trying to wrestle control from a “too bureaucratic” Health Service Executive so it can hire its own social workers, chief executive Fred McBride has said.

Appearing before an Oireachtas committee hearing on a damning report into the agency, Mr McBride said although Tusla was up and running for four years, it had spent the first half trying to keep services going and the other half attempting to resolve problems.

“It wasn’t until 2016 that additional investment was made available to us that we began to reflect and analyse the work needed to be done going forward,” he said. Since then it has started comprehensive “organisational and cultural reforms”.

A key issue was recruitment, as highlighted in Tuesday’s Health Information and Quality Authority (Hiqa) report which found systems failures within Tusla were leading to the mishandling of child sex abuse allegations and leaving vulnerable children at potential risk.

“We are making huge attempts to recruit social workers,” Mr McBride told the Oireachtas Committee on Children and Youth Affairs.

“We have tried to take back control of social work panels [run by HSE’s national recruitment service].

“For the first two years we were entirely dependent on that system for recruitment. I am absolutely clear that it did not and does not meet our purposes or our needs; it is not quick enough, it is too bureaucratic, too inflexible.”

Mr McBride said Tusla had “attempted to take back, to some degree at least” control over the recruitment process by setting its own regional process.

Since then, it had reduced the time it took to hire a social worker from 30 weeks to 19 weeks. It was trying to reduce this further to 14 weeks.

Mr McBride accepted there was also an issue with staff turnover, but claimed “it’s not as bad as other places”.

In Ireland, there was 8.8 per cent turnover rate among social workers, compared with 15 per cent in the UK, he told TDs and Senators.

The Oireachtas hearing was also told of a technology deficit within the agency that was being resolved.

A new integrated IT system, to be fully in place by July 8th, is hoped to eliminate problems with a “paper-based system and a plethora of obsolete and outdated computer systems”.

“There was reliance on post and fax. We are getting rid of faxes,” said Mr McBride.

Jim Gibson, Tusla chief operations officer, said the need for modernisation in the four-year-old agency was a “huge legacy issue”.

They were now giving professionals laptops instead of desktops and smart phones “so they can be mobile”.

Before Tusla, social workers in Ireland didn’t have laptops, Mr Gibson told the hearing. The agency has also appointed a director of IT for the first time earlier this year.