Tusla ‘does not always learn from mistakes,’ chief executive admits 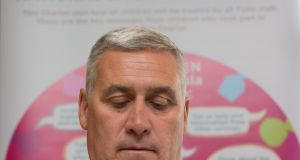 Tusla does not provide a consistent service to vulnerable children and does not always learn from its mistakes, its chief executive has admitted.

However, Fred McBride said he was confident the chances of a repeat of what happened in the Garda Maurice McCabe case was “high unlikely” to happen again and that all of the issues identified in a report on its handling of such cases had been “already identified”.

Mr McBride was referring to the creation and distribution by Tusla (formerly HSE) of a file containing false allegations of sexual abuse against Sgt McCabe, which was sent to the Garda in 2013.

He said a “HR process” was under way involving the Tusla staff whose mistakes led to the investigation by the Health Information and Quality Authority (Hiqa).

Mr McBride was responding on Tuesday to the report into its management of allegations of child sexual abuse against adults.

“We absolutely acknowledge the inconsistencies that were identified by Hiqa, and we accept there is a variability in the standard and quality of some of our interventions.”

He expressed confidence that what happened in the McCabe case was highly unlikely to happen again given the recent full roll-out of a national, computerised child welfare recording system.

“I can assure you a HR process is underway and the people involved in that particular case are very clear that they will be, and are, subject to a process. I am not going to comment on the outcome of the HR process.We will of course act on the recommendations of that process.”

He said Tusla was not the ideal body to investigate retrospective allegations of child sex abuse, brought by an adult who had been abused, sometimes many years before. In other jurisdictions such allegations would be investigated by police officers and any current concerns about child welfare then be brought to social services.

“It’s a space we have been thrust into by case law. We have had to furiously train a cohort of staff to build up the experience to do it. Ultimately we would want to be moving to joint teams with the guards, where there is a clear distinction of roles between a forensic style interview to find out whether something happened or not and then the implications for protecting children now. It’s the protecting children now that is what we want to concentrate on.

“But where we are now is that we are having to train staff to do this work which has not traditionally been done by social workers. That has been exceptionally challenging for us.”

Asked about the Hiqa assertion that Tusla did not always learn from mistakes, he said: “They have a point. There are times Hiqa points up issues in a particular area and we don’t always learn across all areas. That’s something we are going to have to look carefully at. That contributes to the inconsistency of practice.”

Inconsistencies in the approach of social work teams across the state, he said were being addressed as part of a new programme, Signs of Safety.

Tusla was established in 2014. He said there was a move to recruit more administrative staff and thereby free up social workers for frontline work.