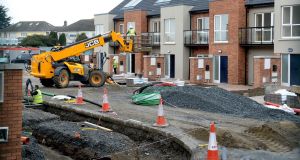 The assumption that Dublin’s social divide is between the north and south sides is firmly debunked in a new housing data resource to be unveiled on Monday.

The interactive map shows clearly that wealth, property ownership and social well-being is concentrated in the east, stretching from Howth in the north down through to Sandymount and on to Killiney on the south coast. Meanwhile, low house prices, bedsits, social housing, overcrowding and lack of central heating are concentrated in the inner-city and the west – from Mulhuddart in the north to Tallaght and Ronanstown in the south.

House and apartment sales in the first quarter of 2018 are shown, colour-coded blue for sales of €100,000 or less, through green, orange and yellow, to red for €1 million or more.

A smattering of red dots from Malahide – where a house sold for €1.5 million in February – through Sutton and Clontarf can be seen, stretching inland from Sandymount to Rathgar and continuing down the coast to Killiney where a house sold in March for €2.25 million.

In contrast, the west is a collage of blue and green dots. Seven kilometres south-west of Malahide, in Darndale a house sold in March for €35,000, with several in Clondalkin and Tallaght going for €70,000 to €80,000.

In rents too, information is mapped in a revealing fashion, showing Dundrum, Foxrock and Mount Merrion in the south east had the highest average rents at €2,054 per month, reflecting houses sizes there as well as location. The lowest average rents were in Cabra/Finglas at €1,348 per month.

Landlord “types” are also mapped, showing the highest proportion of “company” landlords, such as real-estate investments trusts (REITs) around the city centre and Tallaght. In the North Dock area, 485 of the 1,552 tenancies there registered with the RTB in June 2018 were to “company landlords”.

Side-by-side with them are bedsits, concentrated in the north-inner city. In one part of the Mountjoy Square area, 52 out of 139 households are bedsits.

Owner-occupation is spread across the capital, although almost absent in areas like the inner-city. Around Mountjoy Square, just 7 per cent of homes are owner-occupied, compared with Churchtown-Rathgar where between 69 and 91 per cent are.

The maps also reveal a huge disparity in the distribution of social housing. Eastern coastal areas are almost devoid of social housing, while there are evenly spread concentrations in the city centre and then large blocks in the west. Clondalkin has 88 per cent social housing, Jobstown 83-89 per cent and Corduff/Blanchardstown 78 per cent.