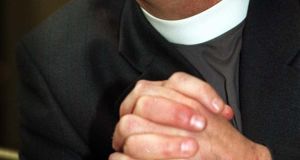 The assembly decided same-sex couples could no longer be full members of the church, nor could their children be baptised. Photograph: Pacemaker

A total of 232 Presbyterian ministers and elders have acknowledged “the profound sense of hurt, dismay and anger” felt in the church following decisions at last month’s general assembly on same-sex issues.

The assembly decided same-sex couples could no longer be full members of the church, nor could their children be baptised. It also decided to loosen ties with the Church of Scotland as the latter moved towards approving same-sex marriage.

In a statement last night, A Cry from the Heart, the ministers and elders said: “As teaching and ruling elders in the Presbyterian Church in Ireland, we acknowledge, and indeed share, the profound sense of hurt, dismay and anger currently being expressed in the wake of decisions taken at our 2018 general assembly. This level of feeling is unprecedented in our pastoral experience.

“We are committed to doing all we can to ensure that the decisions which have prompted such a level of concern will be subject to the urgent attention they deserve, and for which many in the church are calling.

“We gladly acknowledge that we ourselves have been constantly enriched and challenged by the diversity of views found in the Presbyterian Church in Ireland. Therefore, as we participate in this work of critical engagement and discernment, we hold that any unnecessary narrowing of the range of acceptable theological perspectives within the Presbyterian Church in Ireland will damage our credibility and limit our future.

“We make this statement: as a prayerful expression of appropriate loyalty to the Presbyterian Church in Ireland at this moment in our history; as a necessary consequence of our ordination vows, which we take with the utmost seriousness; and by the grace of God, as an imperfect yet credible witness to our trust in Jesus Christ alone. To God alone be the glory.”

A report approved at the assembly last month stated: “it is clear that same-sex couples are not eligible for communicant membership nor are they qualified to receive baptism for their children. We believe that their outward conduct and lifestyle is at variance with a life of obedience to Christ.”

Clerk of the general assembly Rev Trevor Gribben said it was felt “both denominations have drifted far from biblical truth in relation to marriage, and were in fact ignoring the authority of scripture”.