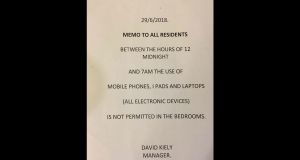 The memo posted at Eyre Powell hostel in Newbridge on Saturday. Photograph: Movement of Asylum Seekers in Ireland/Facebook

A notice posted in a direct provision centre in Newbridge on Friday banning the use of electronic devices in bedrooms during the night has been removed following complaints from residents.

The poster, entitled “Memo to all residents” and dated June 29th, 2018, stated that between the hours of midnight and 7am the use of “mobile phones, iPads and laptops (all electronic devices)” was no longer permitted in the bedrooms at the centre. It was signed by David Kelly, manager of the Eyre Powell hostel in Newbridge.

Lucky Khambule from the Movement of Asylum Seekers in Ireland (MASI), who visited asylum seekers living in the centre on Sunday, said residents were shocked to receive the news that they could no longer use their smartphones in the privacy of their own bedroom at night.

“They feel it is breach of their right to privacy and they also are scared of being victimised,” said Mr Khambule. “Some of them are studying and prefer to work on their assignments when it’s quieter at night. There was no consultation with regards to it and explaining why this new rule was made. They feel very let down and angry about it.”

A spokesman from the Department of Justice, who was contacted by The Irish Times after the notice appeared on social media, said the memo was withdrawn at 10am on Sunday.

He said management of the Eyre Powell accommodation had issued the original memo because of complaints about certain residents making late night calls from their bedrooms.

“The notice was issued because some residents were using phones, tablets, etc to make and receive calls late at night and as a consequence disturbed other residents,” said the spokesman. “A new notice requesting residents to take due cognisance of other residents’ need to sleep, rest, etc will be issued as soon as possible.”