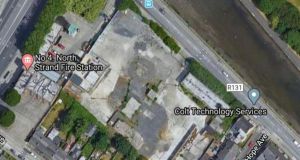 The former Readymix concrete site on East Wall Road. Up to 90 apartments are to be built on the land. Image: Google Maps

The construction of almost 300 social homes on three vacant sites in Dublin, including one bought by the Dublin Docklands Development Authority (DDDA) for €23 million, has been approved by the Department of Housing.

The homes will be part of a batch of 1,500 social houses and apartments, which it was announced five years ago would be built across the State using public-private partnerships (PPPs) at a cost of €300 million.

Dublin City Council has been approved to build the homes at the junction of Collins Avenue and Swords Road in Dublin 9, where up to 100 apartments will be built, at Shangan Road, Ballymun, where 80-100 homes specifically for senior citizens will be located, and in East Wall, where the former Readymix company site can accommodate up to 90 apartments.

While the Collins Avenue and Ballymun sites have long been in the council’s ownership, the Readymix site came under its control four years ago following the dissolution of the DDDA.

The former Readymix concrete site on the East Wall Road was among a number of costly purchases made by the DDDA in 2006, which included the site of the old Irish Glass Bottle Company in Ringsend that it bought as part of a consortium for €412 million.

While the Readymix site was substantially cheaper at €23 million, the DDDA still paid €7 million over the asking price for the plot, just behind the fire station, close to Fairview village. The site was last valued in 2017 at €5.5 million.

While the site has remained undeveloped since it was bought by the DDDA, it was in 2015 used as a demonstration site for the original modular housing planned for homeless families living in hotels. Six providers installed portable prefabricated units on the site, but none were chosen by the council, which instead built traditional two-storey houses.

The council is currently in the process of building social housing at two other sites using the PPP model; at Scribblestown, west of Finglas where 70 homes are due to be finished by the end of this year, and Ayrfield in Coolock where 150 are expected to be completed by the middle of next year.

The social housing projects are the first large-scale PPPs pursued since the collapse of the developer-led social housing system nine years ago. Developer Bernard McNamara backed out of a PPP deal to develop five city council sites for housing in 2008, leaving council housing flat complexes derelict.

The Government’s Social Housing Strategy 2020, published in 2014, proposed returning to PPPs as an off-balance sheet mechanism to provide housing for local authority tenants.

In October 2015, then minister for the environment Alan Kelly announced six locations had been chosen for the 500 homes, including Ayrfield and Scribblestown sites at Dunleer in Co Louth, Convent Lands in Wicklow town and Craddockstown in Naas, Co Kildare.

Unlike previous PPP models, the sites will stay in the ownership of the State and the developer will get payments for a 25-year period, after which the houses or apartments return to State ownership.

While the council has approval to go ahead with the next batch at the Readymix, Ballymun and Collins Avenue site, their development will require the approval of councillors. Since the local elections last year, councillors have resisted the development of council land by private developers.

However the council’s head of housing Brendan Kenny said he hoped the projects would have the “strong support” of councillors.

“In view of the current housing crisis and the large waiting list for social housing in these particular areas, we would welcome strong support for the development of these sites for the provision of much-needed social housing,” he said.