Lockdown easing: ‘To be able to get out again is great’ 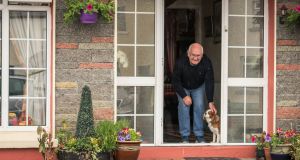 Tom Watson at his home in Ballinrobe, Co Mayo: vows to be on the golf course on May 18th, “hail or snow” . Photograph: Keith Heneghan

Michael Walsh returned to Ballinrobe after living 40 years in London. When he returned in 2004, playing golf, a habit he picked up during his time away, became his way of settling back into his home town.

His childhood friend, Tom Watson – a golfer, but not the golfer – played regularly with a group. Their weekly game became a ritual, something denied to both since the Covid-19 crisis began.

Fit and healthy, Walsh is delighted that golf clubs will reopen on May 18th. However, it is a bittersweet result for him. He lives in Partry, beyond the 5km limit.

“It is a torture,” he admitted on Tuesday. “Overall, the easing of restrictions is a really good thing. It is an indication that things are moving on not just for us but for everyone.”

Like so many others of his age, Walsh spent the last five weeks largely confined to the house. It is, he is certain, the most time he has ever spent in any of his homes during his adult life.

His wife Bridie had a minor fall about seven weeks ago and was off her feet for a couple of weeks during the beginning of the lockdown. They have been diligent about the rules and tried to remain amused by the minor annoyances.

Watson was one of those who stayed in Ballinrobe, running the family garage for 20 years before knocking it and converting it into a successful furniture store.

“I was glad I did it. The last recession put the kibosh on it and I retired. I wouldn’t swap here for anywhere in the world. It has everything I require. A good golf course. A good race course. A good football pitch. It ticks all the boxes. Lovely walks by the river which I used to do every day and the town park is done up and beautiful lit up at night.”

One of the more famous facts about Ballinrobe is that it once had 49 pubs. There were about 1,500 people in the town then. Now, there are 3,000 and seven pubs.

The golf group – Michael nicknamed them The Last of the Summer Wine – enjoyed visiting the local taverns after a game. The group would vary in number. Seán McEvoy, a Down man living in the locality, joined them regularly along with Gerry Comer. They’ve lost a few friends in recent years. John Rochford was a local force of nature. Brendan Higgins was a good friend.

“When you reach our age, you begin to lose people, which is kind of tough,” says Michael Walsh.

Unlike his friend, Watson will be able to get to the golf-course: “I’ll be there on the 18th rain, hail or snow,” he vows.

“Pre-Covid, as we will call it, the biggest job I had was collecting the grandchildren from school. You do miss that awfully. And you can’t give them a hug and they are looking in the window at you and wondering what is going on.”

Mondays at 12 was his time for golf.

“I didn’t collect the grandchildren that day. We would potter around for three or four hours, go in and have a pint and go home.”

He was up and out first thing Tuesday morning and intended using every last metre of his 5km allowance on his afternoon walk.

Their golf group keeps in touch by phone but they are of the face-to-face generation. Michael Walsh has avoided boredom by setting himself projects he had either put off or hadn’t noticed because he spent so much time on Mayo’s golf courses. He isn’t worried about the virus in itself.

“What does worry me is watching some of the reports about the retirement homes and nursing homes and the impact of the virus. And the lack of Government help and thought about these places. They were just left to kind of run themselves and whatever happened, happened.”

“I do think the golf club will be under pressure after this.”

Watson cannot understand the logic of the 5km rule. His local course has members from Galway and across Mayo.

“Some are as far as Oranmore. They will have a job to watch them! But the crazy thing about this is if you get into your car in Headford you are totally isolating until you get to the golf club. It doesn’t make a lot of sense. I presume the club house won’t be open or any of that stuff. You get back into your car and you go home.”

Nevertheless, Watson will take the blessings offered: “To be able to get out again is great. We may have missed the best of the summer. But we won’t be giving out about going out in the rain now.”