State agency has been seeking partners to develop 37-acre site with 3,500 apartments 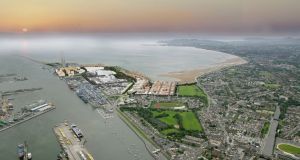 An aerial view of Ringsend, including the former Irish Glass Bottle site, now controlled by Nama

The National Asset Management Agency (Nama) closed bids for the development of the Irish Glass Bottle site in Ringsend, Dublin on Monday.

The State agency had been seeking partners to develop the 37-acre site on the south bank of the River Liffey, thought to be worth up to €130 million before Covid-19 struck, since last year.

Developers still interested in joining forces with Nama to build 3,500 apartments, along with offices and shops, on the site, had to submit their final bids to Nama on Monday.

Nama did not comment on the number of bids received on Monday, nor on how long it was likely to take the agency to choose a partner to develop the site.

Several high-profile property players were said to be left in the race to develop the Dublin property.

They include developer Sean Mulryan’s Ballymore Group, which was regarded as one of the front-runners in the process.

His company worked closely with interested parties, including Dublin City Council, when it was preparing its tender.

US group Hines also took part in the process, as did a partnership of Johnny Ronan’s Ronan Group Real Estate and Los Angeles property company Colony Capital. British developer Quintain was also said to have been interested.

Reports last year indicated that Nama was seeking between €125 million and €130 million for an 80 per cent stake in the project.

However, it is not known if the Covid-19 pandemic has changed what potential partners are willing to pay the agency to get involved.

Property industry sources continued to question yesterday if developers would remain interested in bidding for the project, particularly at those prices.

Banks and other financiers are not committing to backing building projects at the moment.

They have told developers that it could be at least three to four months before they consider funding construction or property ventures again.

Plans for the Irish Glass Bottle site allow the building of 3,500 homes. Social housing must take up 600 of the total, while a further 300 must be affordable dwellings.

The plans, approved 12 months ago by An Bord Pleanála, also provide for 860,000 sq ft for shops, offices and other businesses, along with schools, parks and other amenities.

The land on the south bank of the River Liffey is the biggest vacant development site in central Dublin. It comprises property that once housed the Irish Glass Bottle factory, owned by Ardagh, and adjoining premises that previously belonged to boom-era developer, Liam Carroll.

Ardagh ceased manufacturing there in 2002. South Wharf, a Dublin-listed offshoot of that company, sold the glass bottle property to a consortium, Becbay, in 2006 for a record €412 million.

Nama subsequently got control of both the glass bottle property and the Liam Carroll-owned lands after it took over Irish banks’ property loans in 2010.