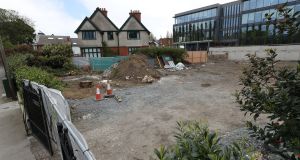 Efforts are underway to preserve the final home of The O’Rahilly, who died in the 1916 Rising. It follows proposals for its demolition to make way for an apartment scheme.

The McSharry and Kennedy building families, owners of the Herbert Park Hotel, want to build 105 apartments fronting onto Herbert Park on the site of three Edwardian villas.

Two of the houses, numbers 36 and 38 Herbert Park have been recently demolished. The last remaining house of the row, number 40, was the home of Michael Joseph O’Rahilly, known as The O’Rahilly, the only leader of the Rising to die in battle.

His grandson, Proinsias O’Rahilly said he was deeply concerned number 40 will now be levelled despite there being no planning permission in place for its demolition.

“The house is of great historical significance. It is where the Asgard gunrunning was planned, meetings for the planning of the Rising were held there, Countess Markievicz and my grandmother initially set up Cumann na mBan from the house, and it was the house to which my grandfather addressed the note to my grandmother as he lay bleeding to death.”

The house and its neighbours were built in 1907 for the World’s Fair Irish International Exhibition to promote Irish industry. The O’Rahilly was the first occupant of number 40 in 1909 and his widow Nancy lived there until her death in 1961.

In 2018 Lordglen Ltd, the hotel owners’ development company was granted permission for the demolition of numbers 36 and 38 as part of the development of an extension to an aparthotel, and 18 apartments in two blocks. However, this scheme never went ahead.

The company subsequently bought number 40 and in recent months was given leave by An Bord Pleanála to make an application for 105 apartments at the site of the three houses. However, an application for this development, and any demolition work to number 40, has not yet been registered with the board.

Mr O’Rahilly, a member of the 1916 Relatives Alliance, believes the house is in need of urgent protection and should be listed on the Record of Protected Structures (RPS), and be declared a National Monument to preserve it from destruction.

“I fear my grandfather’s house is in imminent danger, following the demolition of the other two houses. The whole history of this house is bound up with the history of the republic. It has a very big place in our history and should be listed.”

Sinn Féin councillor Mícheál Mac Donncha has submitted a motion to Dublin City Council to have number 40 added to the RPS, and is seeking talks with officials this week to ensure no demolition takes place.

“Clearly this is a very historically important building. It’s where he left from to go to the Rising and where he sent his famous note to his wife. We have lost so many historic buildings over the years – all of the houses associated with Robert Emmet have been destroyed – it is part of a pattern as we have seen with Moore Street. Our history must be protected.”

The plea to save the house comes in the same week as the death was announced of Ronan O’Rahilly, founder of legendary pirate radio station Radio Caroline and a grandson of The O’Rahilly.