Alliance calls for end to child poverty in pre-budget submission 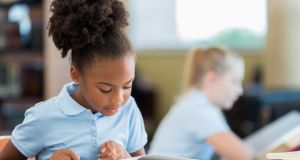 Suzanne Connolly of Barnardos said: ‘The Government can use Budget 2020 to make a start by making school books free for every child in primary school.’ Photograph: iStock

Government must ensure all children receive a hot meal a day, free school books at primary level and the opportunity to have a hobby, according to the Children’s Rights Alliance (CRA).

In its pre-budget submission, the alliance calls for “the beginning of a long-term, concerted effort by Government to end child poverty”.

The submission proposes: provision of a hot meal daily for all school children; an increase in income thresholds for the medical card; free school books for all primary school children; a €30 subsidy per child to ensure they can do an arts or cultural activity in their community; and greater childcare supports and targeted supports for children most at risk of poverty, for example, in single-parent households.

More than 130,000 children – about one in nine – live in consistent poverty, meaning they live constantly without adequate food, housing or heat, leading to higher than average levels of ill-health and low educational attainment, which in turn leads to a greater likelihood of poverty in adulthood.

“We can do better,” said Tanya Ward, chief executive of the CRA. “We need political leadership . . .The budget is the last chance for this Government to do something to free families trapped in poverty. It should mark the beginning of what needs to be a long-term, concerted effort.”

From this month, a pilot scheme will see 36 schools providing hot meals to pupils, but the CRA said this should be rolled out nationally.

“This is a scheme that every child can benefit from but especially lower income families,” said Ms Ward.

CRA member Barnardos said “rising school costs” had to be addressed as these were “squeezing the opportunities of children to participate fully in education”. Chief executive Suzanne Connolly said action did not have to wait. “The Government can use Budget 2020 to make a start by making school books free for every child in primary school. It can be done with €20 million [a year] – just 0.2 per cent of the department’s budget.”

Karen Kiernan, director of One Family, also a CRA member, spoke about the need to support families most vulnerable to poverty and called for the establishment of a social support fund to assist these families.

“One-parent families are five times more likely to live in consistent poverty . . . We are calling for investment in childcare supports so that families do not lose out in the new National Childcare Scheme.”