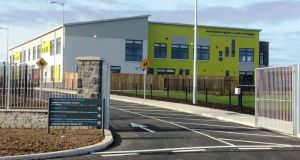 Ashbourne Educate Together National School was able to open its doors for the school year only on Monday.

Eighty children, due to start school last Monday, have had the beginning of their school year postponed again following delays in their school buildings being certified as safe.

This follows 1,500 pupils having their return to school delayed last week also due to building safety concerns.

Five Educate Together (ET) schools in Dublin, including one secondary school, first delayed opening until Wednesday, have now been told they cannot open until next Monday.

These follow the delayed re-openings last week of five other Educate Together schools, four in Dublin and one in Co Meath, affecting 1,499 pupils.

While this week’s delays concern new temporary buildings and centre on problems issuing safety certificates, most delays last week were due to structural problems identified over the summer.

These schools had all been built by the Co Tyrone-based Western Building Systems construction company. Late last year 42 schools it built were structurally assessed and precautionary measures were put in place at 22 schools.

This week three brand new schools – Harold’s Cross ETNS, Dublin 13 ETNS, Killester Raheny Clontarf ETNS – and Dublin North East ETSS and the Dublin South City ETNS, which opened in 2018, remain closed and the children due to attend them, at home.

A spokesman stressed neither Educate Together nor its schools’ staff had any control over delays which had happened because Dublin City Council remained unable to issue Building Control Regulations certificates to the Department of Education as the buildings did not yet meet all planning, structure and fire safety regulations.

“Educate Together recognises and shares the deep frustration and inconvenience faced by the families, staff and wider school communities involved. No school community should be placed in this difficult situation. It is particularly disappointing for junior infants children and their families,” he said.

“The necessary certifications can only be completed by the Department of Education and their contractors. Lack of communication from the department with Educate Together and the school principals has exacerbated the stress caused by the delays.”

The patron body operates 91 primary and 17 secondary schools and says it repeatedly raised concerns with the department over the summer about the too-short time-frames it was allocating to have works completed and buildings ready.

A spokesman for the Department of Education confirmed “a small number of new schools were affected by delays of a few days to facilitate the completion of some external works around the schools’ start-up accommodation and also to ensure the buildings are fully certified”.

“The affected schools will open on Monday, 9th September.

“The department has met with Educate Together on a monthly basis over the last 12 months to keep the patron body and its schools informed of progress in the provision of accommodation for these schools.”

Taoiseach does not envisage having to close non-essential retail again 22:47
Publicans accuse Government of using misleading data to keep them closed 22:30
Many tourism, hospitality sector businesses ‘teetering on brink’ of collapse 22:05
Covid-19: Central Mental Hospital to test all patients and staff as outbreak confirmed 21:48
Children in need of MRI under general anaesthesia waiting 4-7 years 21:10