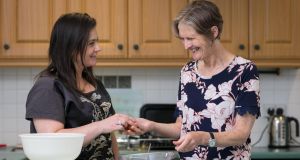 It was “disgraceful” that just 20 per cent of people with sight-loss, of working age, were in employment, while Irish universities had only 229 sight-less students, chief executive of the National Council for the Blind (NCBI) said on Wednesday.

Chris White, speaking at the publication of the charity’s 2018 annual report, called on “corporate Ireland” to step up and see beyond a person’s visual impairment.

“The sightless community in Ireland is one of the most marginalised in the State. With technology advancing the way that it has and the way that it will do in the future there are opportunities for people in our community to work in Google and Facebook and Apple and Microsoft, the NCBI, the Central Bank or any other business in this country.

“Corporate Ireland needs to step up to the mark and understand the talent that they continue to overlook. It requires employers to see beyond the disability and support the talent that already exists.”

There are 55,000 people in Ireland who are blind or visually impaired. Last year the NCBI saw a 30 per cent increase in the number of children it worked with – to 848.

Among those who have had to give up work as a result of sight-loss is Deirdre Deverell (61), from Dalkey, Dublin. Up until 18 months ago she was working in the laboratory in Temple Street children’s hospital.

She began getting “interference” in her vision and was diagnosed with glaucoma. Her vision gradually deteriorated.

“The occupational health department in Temple Street suggested I go to NCBI to see if they had aids that could help me at work. I had to take a deep breath to go to the council, for the blind. I visualised people with no sight at all. But they had a huge range of services for people like me, losing my sight, and helped me a lot.”

Her sight, however, worsened to the point where it was no longer safe for her to work. Leaving was “traumatic”. Finally, in the space of about a week over Christmas 2017, she lost her sight completely.

Her contact with the NCBI has opened other possibilities.

She found using a white stick “liberating” after spending months “like a hermit in the house, afraid to go out.

“Over-hanging branches are a problem. Even with your stick on the ground you do get hit. Glass doors, unmarked steps. Things on the pavement like sandwich boards. People just aren’t aware for example when they are putting out street furniture.

“I’m married to a wonderful person who is a fantastic support. I have great friends and great support. I know I am privileged I have family support and confidence that comes with education, but what I do say is get out and use the services and the NCBI is a great place to start.”