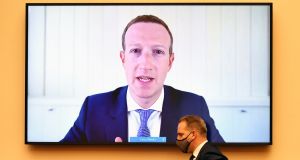 One class of people has done particularly nicely off the coronavirus pandemic: billionaires. Since it started, as more than 50 million Americans turned to the dole to survive, billionaires became $637 billion richer. Of particular note was the elevation last week of Facebook chief executive Mark Zuckerberg (36) into the exclusive ranks of the world’s centi-billionaires, joining Amazon chief Jeff Bezos and Microsoft co-founder Bill Gates on personal net worths of over $100 billion.

Zuckerberg has a 15 per cent stake in Facebook, which like many other online businesses has enjoyed sales surges during the pandemic. Facebook’s fortunes were also sharply boosted by its release last Friday of Instagram Reels, a TikTok competitor.

Zuckerberg is not alone. Bezos has seen his net worth soar by $63.6 billion this year to close to $200 billion

When the dust settled on Friday’s stock exchange trading session, the tech giant was up 8.2 per cent to a record high, netting Zuckerberg $7 billion. Enough to push him over the $100 billion, a personal fortune that has grown on average by $9 billion a year since Facebook went public in 2012.

“Monopoly money”, you might say. But this is the real world, not a board game.

Zuckerberg is not alone. Bezos has seen his net worth soar by $63.6 billion this year to close to $200 billion. On one day this month, it leaped an unprecedented $13 billion. Seven of the world’s 10 richest people derive the bulk of their fortune from technology holdings, with a combined net worth of $666 billion, up $147 billion this year.

“Billionaires should not exist,” former US Democratic presidential candidate Bernie Sanders declared last year on the campaign trail. The US, he said, is “a moral and economic outrage.”

And it appears Zuckerberg, who has pledged to give 95 per cent of his Facebook holdings to charity, might agree. In a staff live-stream exchange in October he confessed that “I don’t know that I have an exact threshold on what amount of money someone should have … But on some level, no one deserves to have that much money.”

At the time he was worth only $70 billion.