What is life? Top scientists gather in Dublin to work on Schrödinger’s key question

Five Nobel Prize-winners and some of the world’s most brilliant science minds will speak at the Schrödinger at 75 – the Future of Biology meeting, hosted by Trinity College Dublin 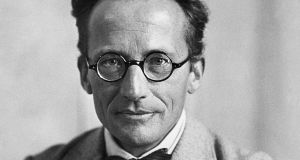 Theoretical physicist Erwin Schrödinger who ventured into biology to ask the question, ‘What is Life?’ in a series of lectures in TCD during 1943. Photo: Getty Images.

Some of the world’s leading scientists in biology and medicine are gathering in Dublin this week to work on unfinished business in determining “What is life?” The famous theoretical physicist Erwin Schrödinger asked the same question at a public lecture in 1943.

Five Nobel Prize-winners and some of the world’s most brilliant science minds will speak at the Schrödinger at 75 – the Future of Biology meeting, hosted by Trinity College Dublin on Wednesday and Thursday.

The meeting at the National Concert Hall takes its inspiration from a seminal moment in history that changed the course of science when Schrödinger delivered his groundbreaking What is Life? lectures in TCD.

They prompted a golden era in molecular biology, and had a major influence on James Watson and Francis Crick’s discovery of DNA’s double helical structure in 1953. That opened the door to huge scientific progress, with a billion and one secrets slowly prised from DNA and the genes that had previously been shrouded.

“Fast-forward 75 years and the burning issues of science today are on the agenda, with the world-leading scientists whose work will shape its future set to outline their personal thoughts of what the future may hold across a suite of sub-disciplines within the field of biology,” said Prof Luke O’Neill of TCD, one of the conference organisers.

He added “It’s our great hope this meeting and the seeds it sows will ensure Dublin will once again be remembered for shaping future work on that most important of all questions: ‘what is life?’.”

Prof Ada Yonath of the Weizmann Institute of Science, who won the Nobel Prize for Chemistry in 2009, said: “Attempts to shed light on the physicochemical basis of life, were reported in a course [by Schrödinger] given 75 years ago, during the second World War yet attracting about 400 listeners. These partially successful studies provoked more questions, which triggered sophisticated research that progressed us significantly towards this aim, but so far did not reach the final answers.”

“Some of these studies and their take-home lessons are being addressed in the [Schrödinger at 75] meeting dedicated to this subject,” she added.

Prof Tonegawa of Massachusetts Institute of Technology, who won the Nobel Prize for Physiology or Medicine in 1987 for discovering the genetic mechanism that produces antibody diversity, now focuses on the rapidly developing field of neuroscience; notably engrams – these are believed to be the means by which memories are stored as biophysical or biochemical changes in the brain in response to external stimuli. The existence of engrams is believed to explain the persistence of memory and how memories are stored in the brain.

In advance of the meeting, he said: “The discovery of memory engrams, and engram-bearing brain cells, is revolutionising the neuroscience of learning and memory. Not only are we learning a great deal about how memory is formed, stored, and retrieved but also we can now engineer memory, emotion and behaviour.”

Keynote speaker is philosopher Prof Daniel Dennett of Tufts University. With the title and focus of Schrödinger’s 1943 lectures in mind, he will share his thoughts for the future of life. Other speakers will address the most pertinent questions on emotion; consciousness, extinction; ancient DNA; gene and brain editing; artificial intelligence; infectious disease; plant life; ageing and immunology.

All places are booked out but conference talks will be livestreamed for the public from 9.00am to 6.15pm on both days at: https://www.youtube.com/user/TRINITYCOLLEGEDUBLIN/live

Trinity Library has curated an exhibition which celebrates Schrödinger and his time at Dublin Institute for Advanced Studies. It is being staged in the Long Room, Old Library, and runs until October 31st.