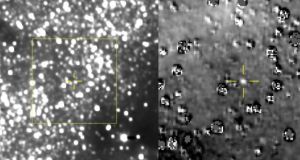 Two images taken by Nasa’s New Horizons spacecraft showing 2014 MU69, an object in the Kuiper Belt. The right view is a close-up of the area outlined in yellow at left, with 2014 MU69 in the crosshairs. Photograph: Nasa/Johns Hopkins University Applied Physics Laboratory/Southwest Research Institute

Nasa’s New Horizons spacecraft still has 100 million miles to go, but it has taken its first snapshot of the rock that will be its date for New Year’s Day 2019.

Mission scientists said they were a bit surprised that the camera on New Horizons was able to make out the tiny object, no more than 20 miles wide, so soon and from so far away.

The image shows a dim dot amid a background of distant stars. Over the coming months, the dot, which has the designation 2014 MU69, will become brighter and larger as New Horizons approaches. Calculations originally indicated that the spacecraft would not be able to reliably spot the target until at least mid-September.

“We thought it’s worth giving it a shot a month early,” said Harold Weaver, a scientist at the Johns Hopkins Applied Physics Laboratory and the principal investigator of the long-distance camera aboard New Horizons.

At first glance at any one image, all that can be seen are stars. But in 48 images taken by New Horizons, the scientists were able to subtract the starlight, leaving behind a speck of MU69 right where they expected it to be, at the edge of a much brighter star.

“The whole team is jazzed now,” Mr Weaver said. In an email, S. Alan Stern, the principal investigator of New Horizons, said: “This is good news because it helps our navigators better plan trajectory corrections.”

On January 1st, 33 minutes after the ball drops in Times Square, the spacecraft is to pass within 2,200 miles of MU69. It will be the first close-up observation of a small Kuiper-belt object, one of the clumps of ice and rock beyond the orbit of Neptune.

Three years ago, New Horizons visited the largest Kuiper-belt object: Pluto. That revealed a complex and dynamic world with towering mountains of ice, flat-as-a-sheet plains and possibly even a subsurface ocean.

MU69 is of curiosity to planetary scientists because it is expected to be the opposite: small, simple, unchanging. Almost pristine and undisturbed since the birth of the solar system 4.5 billion years ago, it will provide clues of the early building blocks that coalesced into planets.

Until now, scientists have seen MU69 only through images taken by the Hubble Space Telescope. They gathered more data last summer by chasing shadows. By fortuitous circumstance, MU69 passed in front of three stars within a two-month period, causing the stars to momentarily blink out. The duration of those blinks, as the shadow of MU69 moved across Earth’s surface, would give clues about the size and shape.

On the first two tries, the scientists were not quite in the correct place and missed the shadow. On the third, they succeeded. The results suggested that MU69 is long and thin in shape or actually two objects in orbit around each other. Later, they suggested MU69, as small as it is, might have a tiny moon.

This month, MU69 again passed in front of a star, and New Horizons dispatched observers to Senegal and Colombia. The team again reported success and is in the middle of analyzing the data. But that means that the predictions of MU69’s orbit appear to be spot on. For now, “That’s really all we can say,” Mr Stern said.

In March the mission scientists gave the MU69 an unofficial nickname: Ultima Thule, which in medieval times meant “beyond the known world.” - New York Times