Constructed wetlands: ‘A natural way of cleaning the environment’

Why is a proven, sustainable, environmentally friendly system not being used widely? 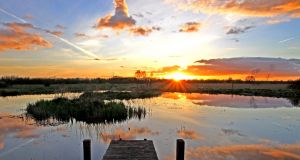 Edmond Dunphy leans on the fence below his yard, and points towards the bulrushes growing in the pond beyond. They’re rustling in the breeze as they get on with the job of soaking up his farmyard run-off.

“The heaviest load is on that first cell,” he says. “As we go down towards the river, you’ll see the water gets cleaner as we go.”

Dunphy is a dairy and beef farmer, with 700 animals and 350 acres near Dunhill, Co Waterford, but he has devoted six acres to a constructed wetland, to handle the run-off and washings from his farmyard.

“We knew we had to do something,” he says, “The volume was too great. I couldn’t continue the way I was going. It wouldn’t work building tanks and installing pumps.”

Wetlands are the least understood element of land use in Ireland, but most of them have been lost because of drainage

As we walk towards the river, it’s clear that the wetlands were designed to follow the natural contours of the land. The ponds are planted with rushes and sedges, and edged with willow and alder, taking a meandering route to the valley floor. This allows the maximum opportunity for the plants to take up the nutrients and clean the water before it reaches the river.

Dunphy joined a scheme with a dozen other farmers in the Anne river valley. They were prodded and encouraged by scientist Rory Harrington, who lives nearby, and who had experimented with wetlands on his own land, after Inland Fisheries described the Anne as a “dirty drain”.

Harrington knew shallow vegetated wetlands had the capacity to intercept chemicals, including microplastics, as well as agricultural run-off such as nitrates and phosphates. “Wetlands are the least understood element of land use in Ireland, but most of them have been lost because of drainage,” he says. “We have very little appreciation of their value, but basically they are a sink we can exploit, as well as a habitat that can be enriched.”

Integrated constructed wetlands adopt an ecosystems approach. Essentially they are a man-made system that mimics naturally occurring wetlands, by building a series of shallow ponds and lining them with material found nearby. These are then filled with wetland plants, such as helophytes, which are carefully chosen to suit the habitat involved. The design needs to take account of the site’s hydrology, landscape, soil and functional ecology as well as the types of effluent and the processes involved in capturing the pollutants.

Once a constructed wetland has bedded in, it is largely self-sustaining; a big attraction for farmers who can then save time and money that would otherwise be spent on storage and spreading.

Dairy farmer Milo Murphy has his own constructed wetland in the same catchment as Dunphy’s. “It’s been self-catering since we put it in. All we’ve had to do is clear out a bit of sediment,” he says. “Before it went in, the dirty water was a huge problem. When we spread it on the land, the cows didn’t like the grazing after.”

Dunhill is somewhat unique, in that its farmers had Rory Harrington living in their midst. While he initially persuaded them of the value of the project, years of experience have given them their own take on it.

“From a common sense point of view, you’re not interfering with the environment,” says Murphy. “You’re using the environment to do the processing for you. That’s the real beauty of it – it looks after itself.”

The wetlands require planning permission and a discharge licence, and as of now are only licensed to handle run-off and washings, but not slurry. At the start Waterford County Council monitored the water entering the river every few weeks, and now it’s down to twice a year, according to Murphy.

Given Ireland’s deteriorating freshwater quality, and the pressures caused by intensification, it seems bizarre that a proven, sustainable and environmentally friendly system is not being used more widely.

“In some ways it’s disappointing,” says Harrington. “When we started people saw opportunities, but you don’t just dig a hole and put in plants. You must understand it and design it to fit the location.”

The other big issue is funding. While the departments of agriculture and environment have produced guidelines for the use of wetlands on farms, they have never actively promoted them. The initial scheme at Dunhill managed to attract EU finding, but dairy farmer Murphy thinks it’s pretty obvious why more farmers haven’t got involved.

“If I go to build a shed in the morning, with a slatted tank, I’d get 40 per cent from the department, but there’s nothing for wetlands,” he says. “It’s incumbent on the department to have these kind of systems available through TAMS – the farm grant scheme. It should be a priority.”

Harrington has his own views on why the uptake hasn’t been greater. “There’s a hegemony of institutions, vested interests, consultancies, engineers … The bottom line is that the Department of Agriculture has incentivised hard engineering.”

Dr Robert Leonard, an inspector with the Department of Agriculture, admits there is no data on how many farm wetlands exist and that there has been no grant aid to date. “There is a lot of potential benefit from them, but they have to be done properly,” he says. “It’s a treatment system, and tanks are a storage system, but that’s all we’re grant-aiding at the moment.”

However, constructed wetlands are growing in popularity for other purposes, such as a polishing step for sewage treatment. Harrington’s company, VESI, has also designed systems to deal with waste water from mining, food processing and landfill leachate.

Harrington singles out Waterford County Council as a trailblazer that has embraced the concept, as has Irish Water, which is using constructed wetlands as part of sewage treatment in several locations, with a new project under construction at Lixnaw in Co Kerry.

Scientists at NUI Galway have recently created a database of more than 100 Irish wetlands – wetlands.nuigalway.ie – which gathers together scientific research and practical examples of the concept at work. It includes evidence-based research and sampling data from local authorities, Irish Water and the EPA, in the hope that by sharing knowledge the concept can be spread more widely.

“Wetlands are excellent at removing nutrients and metals and can store high amounts of phosphates and nitrogen,” says Dr Colette Mulkeen of NUIG, who did her PhD on constructed wetland performance. “We’re only at the early stages here in Ireland of understanding phytotechnology; the power of plants. It’s a natural way of cleaning the environment and it just makes so much sense”.

They’re great for wildlife. I’ve ducks and waterhens, and I’ve even found newts in them

Constructed wetlands aren’t just a convenient sink for waterborne pollutants. They can also sequester carbon and can be amazingly biodiverse. Mulkeen has found red-listed species such as the smooth newt, as well as rare insects, in her studies of wetlands in the west of Ireland

Back in Dunhill, Edmond Dunphy is delighted with the environmental bonus that comes with his wetlands. “They’re great for wildlife. I’ve ducks and waterhens, and I’ve even found newts in them.”

Dunhill and the Anne river has become something of a wetlands demonstration site, with a river window offering a glimpse of life underwater, and walking trails encouraging public understanding of the role this ecosystem can play. Farmers from the Lough Carra catchment in Mayo are due to visit soon, to see if something similar might work to reduce the amount of nutrients polluting their shallow marl lake.

There’s no doubt that farmers themselves are the best promoters of the system, and the Dunhill group shows that they are more than willing to embrace environmental measures if they are given support. “Teagasc didn’t know anything about them when we started, and they didn’t want to be caught out if they didn’t work, but they work beautifully,” says Dunphy. “I’m a big believer in working in harmony with nature.”