Are we worried about the wrong plastic? 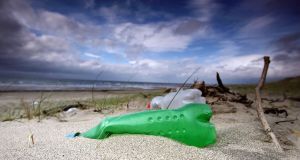 Like many people I spent the Christmas holidays last year binge-watching Blue Planet 2 and gasping in horror at the vivid tragedy of plastic pollution. The scenes of entangled marine creatures and birds decomposing around the cigarette lighters and bottle tops that filled their stomachs were so disturbing that they seemed to provoke a sea change in the way we view waste. Since the series aired, campaigns against coffee cups, packaging-free produce in supermarkets and the news that China would no longer accept our poor-quality recycling have prompted a long hard look at our ability to deal with our own rubbish.

But back in January, David Attenborough’s soft, saddened voice was still ringing in my ears as I dragged the bins out for the first collection of 2018. It was a sobering experience that prompted a fit of personal responsibility: I was going to get through the year on one 240-litre refuse bin, and avoid single-use plastics (recyclable or otherwise) wherever possible.

I figured that if anyone could do this, it was me: my office is within spitting distance of both a zero-waste grocery and a fruit and veg market, I don’t have a family to feed so my choices are my own, and I have a degree in this area, so I should be walking the walk. For four months I became a hardcore anti-plasticist. My routines changed: I shopped local and avoided supermarkets. When I couldn’t, I’d (apologetically) leave extraneous plastic at the till. My diet changed: no more takeaways, Tayto or little pots of hummus. I gave up face wipes, bought a face cloth and gave myself mouth sores from a bamboo toothbrush. Ever-patient friends coming to visit even took their babies’ nappies home.

At the end of April, my bin was just under a third full and all was going swimmingly, until the builder came to finish a job and blew the entire year’s rubbish budget in one afternoon. I was raging, but then it hit me: my waste is managed. A company collects it and sends it to the Poolbeg incinerator and a certified recycling facility, and I don’t throw litter anywhere but the bin. It seemed unlikely that the household waste I was directly responsible for was washing up in the ocean. Maybe my rubbish wasn’t the problem. Was I worrying about the wrong plastic?

Plastic pollution has reached every part of the world’s oceans. It can be large and obvious, like the fishing nets and plastic bags that marine life eats, suffocates or gets trapped in, but it can also be minuscule. Microplastics are less than 5mm in size, nanoplastics are small enough to be absorbed directly by our cells, and they act as transport for the heavy metals, chemical pollutants and pathogens that cling to them.

From sewer to sea

These tiny particles can emerge from larger pieces of plastic that break down in the ocean, but they also come from more unexpected land-based sources that degrade as we use them: car tyre abrasions, bits of road markings, city dust, effluent from manufacturing industries, beads in toothpaste and fibres from synthetic clothing. They wash into the sewerage system, and from there into our seas. One IUCN (International Union for Conservation of Nature) modelling study estimates that primary microplastics from terrestrial environments could make up as much as 30 per cent of total ocean plastic.

Because they’re small, they are eaten by everything, including the plankton at the bottom of the marine food chain. Because they get flushed into drains and wastewater treatment plants, they are in the sewage sludge that gets spread on land. And because the hydrological system is interconnected and highly complex, they are in our drinking water.

According to a 2017 report, two litres of tap water will have on average three pieces of microplastic; 12 pieces in well water. The EPA is funding research to better understand the drivers and impacts, but there is currently no water quality standard for microplastics in Ireland. Our use of plastic is so systemic there is no silver bullet, and the real solutions are complex and poorly understood. While dramatically reducing our use of plastic in our lives is almost certainly a good thing, personal behaviour change – and the images of distressed and dead marine life that drive it – may well be the tip of the iceberg.