To boldly go: science in Seattle (and beyond)

Access Science: An immersive holiday experience to delight all ages 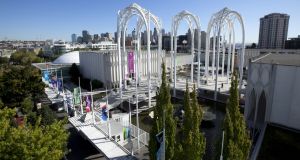 The science centre in Seattle, one of the many scientific attractions in Washington State.

As home to Microsoft, Amazon and the aeronautic giant Boeing, the state of Washington in the US is firmly on the map for technology and engineering. With the recently opened direct flight from Dublin to Seattle, it’s a relatively straightforward journey from Ireland, and if you are visiting there are plenty of scientific attractions to enjoy.

Splashes and butterflies
One of the most obvious tourist attractions in Seattle is the Space Needle, which offers a vertiginous outlook on the city, and is right next to it is Pacific Science Center.

The centre’s outdoor water features and games encourage you to get hands-on, whether it’s shooting arcade-style objects with a hose, trundling a water wheel or cycling on a rail above the water – and the physics behind the fun is neatly explained.

Indoor offerings include laser and Imax shows, virtual reality and an array of interactive and static exhibits. You can test your senses and perception, strength, balance, co-ordination and flexibility; you can learn about the immune system, stars, space travel and dinosaurs; and you can spend time among live butterflies. There’s a local focus too, with a floodable model of the Puget Sound and some slightly unnerving facts about the movement of tectonic plates in the region.

Local life
Down at the waterfront, Seattle Aquarium has even more of a local focus, showcasing Pacific marine life of many kinds. Its indoor rock pools encourage visitors to gently get hands-on with the (sometimes squishy) inhabitants, and the more hands-off moon jellyfish look almost ghostly as they swim through an illuminated tube. You might even see divers, too, who give talks from inside giant tanks teeming with fish.

There’s a strong conservation thread, and local harbour seals, sea otters and orcas are among the creatures highlighted by the aquarium, which is also involved in research into a massive wildlife mortality mystery: why “sea-star wasting disease” started to visibly affect sea stars in the Puget Sound in 2013.

On a happier note, bird fans will enjoy the variety at the Seattle site, as it hosts several seabirds, including the pigeon guillemot, the tufted puffin and the rhinoceros auklet.

Fans of metal birds should also check out the Boeing facility in Everett, Washington, which offers tours where you can see Dreamliner jets being assembled.

Further afield
If you are travelling further around the Pacific Northwest area, Vancouver in British Columbia, Canada, has Science World at Telus World of Science, which is hosting an exhibit about the science and technology behind Pixar (until early January 2019) and of course the stunningly scenic Olympic National Park and Olympic National Forest in Washington offer the experience of nature first hand.

For more information about the Pacific Science Center, see pacificsciencecenter.org
To find out about Seattle Aquarium, go to seattleaquarium.org
Details about the Boeing tour in Everett, Washington, can be found at futureofflight.org

Pro tip: Entry to Pacific Science Centre and Seattle Aquarium are included in the Seattle CityPASS, which offers discounted rates on a range of tourist attractions in the city. See: citypass.com/seattle