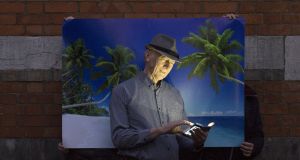 Dr Fiachra Long, head of UCC’s school of education, poses to take a selfie in Cork city in front of a backdrop, which gives the impression he is in the Caribbean, as he discusses nanotechnology. Photograph: Clare Keogh

University College Cork has successfully launched a social media campaign aimed at presenting complex ideas and research in a straightforward way to a general audience. It featured attention-grabbing portraits of researchers taken by Cork-based photographer Clare Keogh, accompanied by accessible explanations of their work.

Developed by UCC’s office of media and PR, it continues to feature on Instagram through the @universitycollegecork account.

It’s focused on “encouraging great communication from researchers tackling the world’s grandest challenges and reinforces the message that making ideas simple, relevant and exciting is not the same as dumbing them down”.

UCC media & PR officer Lynne Nolan said the campaign went well, provoking a lot of reaction and media coverage. Critically, research in an accessible form was widely consumed. “Our own academics are saying they want to be featured,” she added.

The campaign is set to be extended to UCC’s research websites and to other social media platforms.

Prof John Sodeau, director of the centre of research into atmospheric chemistry (CRACLab) at UCC, was pictured hugging trees, and commented in his post about how “Cobh’s Air Quality is in the news at the moment because of the 94 cruise ships coming to call this year; the proposed incinerator and the Haulbowline Island clean-up.”

“So, the CRAC Lab did an Air Pollution walk there in June, just like the PANA car ban 96FM walk we did in April. The results were interesting especially when a big ship is in town. The plume values would not be out of place in the world’s most polluted cities (from WHO data)!”

Arno Fricke, a PhD student in the school of microbiology and environmental research institute, discussed the “Newtrients project” at UCC, which is advancing the technology of using bacteria to produce bioplastic from dairy processing wastewater. This technology could help to use waste materials instead of fossil fuels for plastic production, and provide a degradable bioplastic, which can be composted to fertilise the next generation of the material.

Prof Elke Arendt, of the school of food and nutritional sciences and APC microbiome institute, referred to the challenge of meeting the globally growing demand for high-quality, protein-rich food that satisfies the need of a growing world population while taking care of environmental sustainability, sustainable land-use practices and food security.

“Europe currently has a massive consumption of animal-based proteins for food, and most plant proteins on the European market are used for that purpose. The EU now provides only 30 per cent of the EU’s plant protein needs, and the homegrown part of plant proteins is decreasing.

“The imported 70 per cent, mainly soybeans, comes mostly from Brazil, creating substantial environmental problems as the production results in the cutting down of trees in the Amazon rainforests. The deficiency in protein sources also creates price volatility and trade distortions.”

Dr Fiachra Long, head of the school of education, posed taking a selfie on his smartphone in Cork city in front of a backdrop, which gives the impression he is in the Caribbean. He comments: “Nanotechnology now allows people to see themselves as minds floating above their bodily conditions. Instead of living in a dull world, they can live in an exciting world of action, convenience or leisure simply by wearing a casket on their heads. Casket indeed! A smartphone will do.”