Brightest young scientists from Europe to showcase their work in Dublin 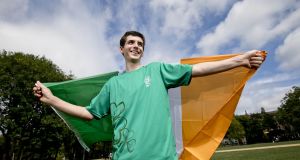 Simon Meehan, Co Cork who is flying the flag for Ireland in the EUCYS at the RDS. Photograph: Chris Bellew/Fennell Photography

Cork teenager Simon Meehan is clear on the key ingredients in his winning of the overall prize in the 2018 BT Young Scientist & Technology Exhibition. It was not due to him being a genius, nor was it a result of luck; it was down to determination and long hours of scientific endeavour.

The now 16-year-old student from Coláiste Choilm in Ballincollig, Co Cork, discovered a natural antibiotic in a blackberry bramble plant in his back garden.

He found a “non-toxic, organic, original antibiotic” after analysing 10 plants widely available in his locality. Having spent two years examining the plants, he extracted and identified non-toxic “anti-microbials” with the potential to be used to treat to human infections, notably MRSA.

The effect was most pronounced in the leaves of a blackberry plant. What started out as an ecological study moved into organic chemistry in search of the structure of a compound.

“People are going deep into the Amazon rainforest looking for new antibiotics. But I’m a 15-year-old boy who found this down his own back garden. That has got to be amazing,” he told The Irish Times after his win in January.

The judges were impressed by the way he combined herbalism and science. Since then, he says he has been going “full throttle” on the research, perfecting his ability to test and key substances using mass spectrometry; notably the structure of compounds – known as characterisation – and ultimately with a view to see what’s happening in the plant that is having this effect.

Therefore his entry to the EU Contest for Young Scientists (EUCYS) later this month is his BT Young Scientist project “plus quite a lot more”. In the meantime, he is a grateful recipient of a six-week scholarship with the Royal College of Surgeons in Ireland which has enabled him to optimise techniques for his own use.

The project looks at the chemistry of a plant, which is often overlooked, he adds, and its effect on bacteria “with potential for the world and for humanity”.

With the help of Dublin City University, he is closer to identifying key compounds involved, as it has helped him perfect the use of a mass spectrometer. But he is most thankful to his support team in Cork, especially his parents; science teacher Karina Lyne, and Anna Hogan and Dr Eric Moore at University College Cork’s analytical chemistry department, where he regularly conducts his study.

Meehan is quick to point out that sometimes things don’t work out. Long hours in the lab can lead to elation or despondency. His great antidote for the latter, is playing the piano. He describes it as “pretty much a life saver”, especially when a little down after an experiment draws a blank.

His win prompted some uninformed commentary on social media. It included the assertion that the competition had become “unwinnable by any regular teenager” and an implication that he had not acknowledged assistance he received – notably from UCC.

Meehan provided an extensive outline of the help he received which was catalogued in his project logbook and verified by those who provided it; something every BT Young Scientist entrant is required to provide.

He does not believe winning the contest is “unobtainable or down to being a genius”. Invariably, it’s a hard slog, he adds. He is intrigued by that social media reaction, so much so he would like to sit down over a coffee at EUCYS with anyone of that view to explain this is not the case.

As for any suggestion he had an unfair advantage, he repeats his view that ultimately science is down to “sheer determination” as well as the people around you. That was the same for Einstein, he suggests – the recipe for robust science.

Yes, he says, he is fortunate in that his mother (Dr Brigid Lucey) is a microbiologist at Cork Institute of Technology and his grandfather Eddie Lucey is a well-known herbalist. Critically, he says that support meant “allowing me to find out things for myself”. To those who raised the issue, he suggests “be in my shoes” and spend some time with him in the lab.

As for competing with older entrants in EUCYS – most are college undergraduates – he is undeterred. “Science is never really about age.” He points to chess champions, mathematicians and musicians of note “who are not all 40 or 50-year-olds”.

I’ve worked very hard for the past three years... and I didn’t do this just to get on TV. I did it for the fun

He accepts there may be an element of chance in discovery but points out he devised a project with clear parameters which improved chances of success, and it was down to him to do the work.

Nor did science and maths come easily to him. He recalls his struggle with both subjects up to third year. He overcame dyspraxia when younger, which meant he was very slow at writing; “where the hands don’t do what the head is telling them”. Transformation came with determination and the help of others, “the resilience of my teachers and their ability to add a little fun”.

The fifth-year student is facing a wide range of career options. Entering the exhibition was “the experience of a lifetime” and added to his interest in Stem (science, technology, engineering, maths) subjects. But at this point, the possibilities for him are plant chemistry, linguistics or music. He doesn’t know yet if he will study aboard though he notes that someone came up to him in the RDS in January and said: “Please stay in Ireland. ”

Ultimately, he is a strong advocate of doing science, which he says suffers from a perception issue in that it is viewed as “a monster” dominated by “genius introverts reading maths books at the back of the room”. For him, it’s “a very sociable thing”, infused with the excitement of increasing knowledge.

“I’ve worked very hard for the past three years... and I didn’t do this just to get on TV. I did it for the fun.”

Ireland welcomes some of Europe’s brightest young minds this month as the country plays host to the 30th EU Contest for Young Scientists (EUCYS), September 14th-19th. It will see 139 students from 38 countries showcasing 90 projects at the RDS in Dublin. The competition is open to countries outside of Europe.

It is open to the public from September 15th to 17th, when visitors will be able to view projects and talk to participants. They have all previously won first prizes in their home country’s national science competition; the equivalent to the BT Young Scientist & Technology Exhibition in Ireland.

Ireland has traditionally performed well in EUCYS having taken home one of the top prizes a remarkable 14 times in 29 years.

Previous winner Abdusalem Abubakar won first prize for Ireland in 2007. His project exposed failings in RSA encryption using continued fractions. He has gone on to a distinguished career with the communications company Ericsson.

“It brings together the best and brightest young minds from across the EU and further afield. Ireland is a fantastic hub for Stem innovation and we are really excited to be hosting the event there this year. The competition is a perfect showcase of the ideals of the EU as it promotes collaboration and innovation across borders.”

Head of EUCYS 2018 Mari Cahalane added: “Now in its 30th year, the competition has strong ties to Ireland, after hosting the event here in 2004 and we are delighted to be back. I am happy to say we will, once again, be showcasing the very best of global young Stem innovation.”

Events such as EUCYS help foster a beyond borders appreciation for Stem innovation, she said. “The contest allows young people to, not only showcase their projects on an international stage but to also get to know some of the brightest Stem minds across Europe and the world – and become part of the next generation of Stem innovators.”

She is encouraging people of all ages who have an interest in science to come along “as having EUCYS on your doorstep, and being able to attend free of charge, is a once in a generation opportunity”.

Members of the public attending EUCYS will also be able to take in performances including psychologist James Soper and his “Your beautiful biased brian” show; and Sue McGrath – aka “Scientific Sue” – who brings spectators on a journey of science with her fire-breathing dragons. Tickets can be downloaded for free at www.eucys2018.com/tickets now