Where’s the evidence? A scientist’s struggle with religion

Science and religion make strange bedfellows. One big clash is the central issue of faith 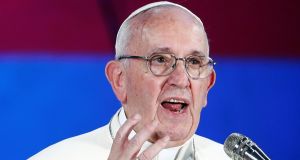 The recent visit of Pope Francis to Ireland, following so soon after the discovery of yet more horrific crimes committed by Catholic clergy against children, prompts reflection the thorny relation between religion and science. How should a scientist react to the pope’s visit?

One answer is that scientists’ views of organised religion are as diverse as those of any other section of the population. While some well-known scientists take a decidedly critical view of the great religions of the world, others profess deeply held beliefs. Indeed, I have often heard prominent scientists describe how they reconcile profound religious faith with their science at the Faraday Institute for Science and Religion at the University of Cambridge. That said, I don’t always find such presentations convincing – my own view is that science and religion make strange bedfellows.

One obvious clash is the central issue of faith – the manner in which almost all religions assume the existence of a supernatural deity in the absence of any supporting evidence. Such a belief system may arise from an instinctive human need to believe in something larger than ourselves, but it is in marked contrast with the practice of modern science, where everything we assume about the world is based upon thousands of observations.

Another marked difference between science and religion concerns the remarkable ability of science to self-correct and change over time. As new observations are recorded and new theories emerge, our view of the natural world has altered considerably, from Darwin’s theory of evolution to modern genetics, from Newton’s laws of mechanics to Einstein’s theories of relativity. By contrast, the major religions of the world rely heavily on tradition and change little over time. Indeed, it is likely that this stasis lies at the heart of one of the most alarming aspects of organised religion, the striking lack of convergence between the different religions of the world.

For some, a consideration of the history of religion can be very illuminating. For example, it is often noted that the pervasiveness of Christianity in Europe owes much to the influence of the Roman empire. Considering the rise of the Protestant church in England, it seems obvious that the movement was driven by the need of a powerful English monarch to sire a legitimate heir as much as any need for religious reform. Historical considerations like these lead to the idea that much of human religion is socially constructed – if man didn’t invent God, he certainly seems to have invented quite a few religions.

Such reflections might appear cynical to the faithful, but they should inform any meaningful discussion of the world’s religions. For example, many of today’s devout Catholics ascribe the attitude of the Catholic Church to female priests to an institutional aberration that will one day be corrected. In my view, one has to consider the possibility that such misogyny is no aberration but a deep-rooted part of church tradition – and strong evidence that the institution is simply a product of its time.

In recent years the church has been rocked by a litany of scandals concerning horrific sexual crimes perpetrated against vulnerable children. Many of the faithful find it incomprehensible that members of the clergy could commit such crimes, and equally incomprehensible that, time and again, the church’s first concern has been to protect the institution, rather than its victims.

Once again, this suggests an organisation that, like so many other human endeavours, is a product of time and tradition, rather than an institution inspired by a divine supernatural being. Indeed, there may come a time when cultural occasions such as weddings, christenings and funerals constitute the only remaining trace of the Catholic Church in Irish society; would that be such a bad thing?