Scientist who sees funny side of physics wins Somerville medal 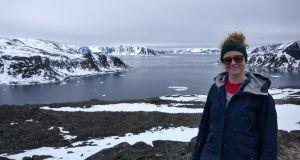 To double up as a nanoscientist and a comedian using physics to prompt a laugh or two is quite a feat. For it to be recognised by the Institute of Physics is even more remarkable.

But NUI Galway physicist Dr Jessamyn Fairfield has had the knack of explaining complex science in an engaging way to audiences in comedy clubs and festivals, rather than lecture theatres, for some years.

Her success is such that the institute, representing leading physicists in Ireland and the UK, have honoured her “stellar work” as a public speaker and writer on physics for a popular audience.

Based at the NUIG school of physics, she been awarded the institute’s Mary Somerville Medal.

Dr Fairfield talks physics in her solo stand-up comedy shows. Since February 2015, she has been the director of Bright Club in Ireland, encouraging academics to discuss their work through stand-up comedy with the help of Science Foundation Ireland funding.

She was getting off an expedition sailing ship in the Arctic in late June, dreading going through a backlog of work emails, when much to her delight the first email she opened informed her of the award. She had just completed a two-week Arctic Circle residency programme on board the Antigua, bringing together scientists and artists to explore how the Arctic and its exploration intersect with art, science, architecture, education and activism.

Comedy was initially a separate part of her life but she soon learned humour is valuable in explaining complexity, engaging people and countering misconception. It helps that it’s “innately informal”. She likes that the work is part of her day job and empowers others “not just me putting myself out there”.

She is a regular science news contributor to Newstalk radio show Futureproof, and has written and narrated a short YouTube film about nanoscience, called Small World.

She is co-organising a Soapbox Science event in Galway bringing female scientists into public spaces to talk about their work at the Spanish Arch on Saturday next.

“When many people think of a scientist, they think of a man in a white coat. Soapbox Science aims to challenge this perception by showcasing the work of female scientists in a fun and friendly way... the scientific community must continue to attract the best talent, and be open and inclusive. We hope this event can inspire people to look at science in a different way,” she says.

“I love the wilderness, the mountains and the sea, but the Arctic has long held a special fascination for me,” she wrote on her blog. “It’s such a stark environment: brutal and yet full of life and beauty too. The stories of Scott, Amundsen, Nansen, and Shackleton are inspiring and terrifying in equal measure. While I have no desire to freeze to death, I wanted to see the edge of the world, to listen to nature and search for humanity.”

The Bright Club’s next gig, “where researchers become comedians and you can furrow your brow before laughing your face off” is tonight at Whelan’s, Wexford Street, Dublin, at 7pm.